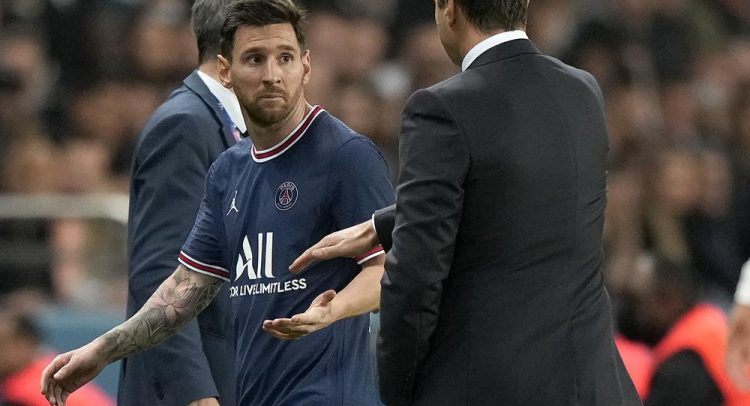 PARIS (AP) — Lionel Messi will miss Paris Saint-Germain’s next French league game at last-placed Metz after a knock to his left knee.

A scan confirmed “the signs of bone contusion,” PSG said in a statement on Tuesday. Another assessment of Messi will be made in 48 hours.

Messi was taken off in the 75th minute of his home debut on Sunday, when PSG beat Lyon 2-1 in the league.

PSG coach Mauricio Pochettino said he took the decision to replace Messi after noticing the six-time Ballon d’Or winner repeatedly touched his knee. Messi, who hit the crossbar with a curling free kick, looked angry at being taken off.

“I’m really happy with what he did during the match, he played a great first half,” Pochettino said during a news conference. “All the great champions don’t want to leave the pitch.”

Messi is still chasing his first PSG goal following his shock move from Barcelona this summer.

PSG’s win against Lyon extended the club’s perfect start to the season ahead of Wednesday’s trip to Metz. PSG has won its first six league matches to open a five-point lead over second-placed Marseille, which has one match in hand.

PSG’s Lionel Messi looks at PSG’s head coach Mauricio Pochettino after he was substituted during the French League One soccer match between Paris Saint-Germain and Lyon at the Parc des Princes in Paris Sunday, Sept. 19, 2021. (AP Photo/Francois Mori)