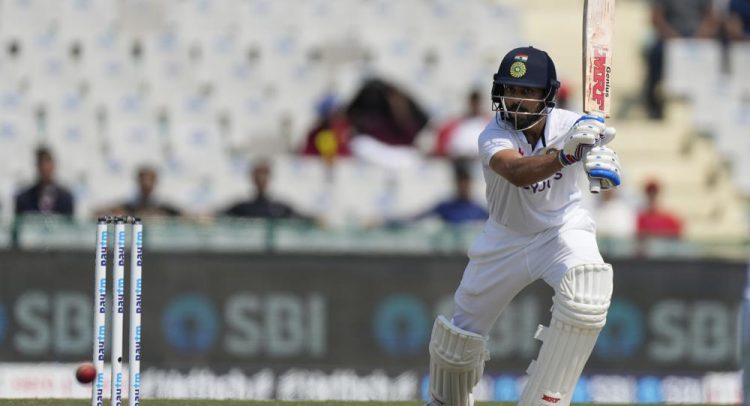 The 33-year-old Kohli scored 45, including five boundaries, during his 76-ball stay. He is the sixth India batter to hit 8,000 runs in test matches and the 12th player for India to reach 100 tests. Kohli went into the match at Mohali with 7,962 runs.

“My mindset has always been to play to help the team win. That is what will remain,” Kohli said. “It is important to feel a certain joy when playing and I have always felt that way and still feel that way.”

Pant got his ninth test half-century as India took control in the third session of the opening day.

Opener Hanuma Vihari (58) completed his sixth test half-century and added 90 runs for the third wicket with Kohli, who walked to the crease to a chorus of cheers.

Kohli’s wait for an elusive 71st century goes on. He last reached the three-figure mark in November 2019.

“As long as there is focus on the right things, I am not too bothered about milestones,” Kolhi said. “These are just conversations that have happened in the outside world and they will continue to do so. I personally don’t think like that. I am batting well and for me that is the most important thing.”

India went to tea at 199-4 with Shreyas Iyer and Pant at the crease.

After the break, the duo briskly added 53 runs for the fifth wicket. Pant reached his half-century off 73 balls, including five fours and a six, but lost his partner at the other end.

Joined by Ravindra Jadeja, Pant then pressed the attack button. He hit another four fours but also three sixes. Pant scored the next 46 runs off only 24 balls as India crossed 300 in the 77th over.

The Pant-Jadeja partnership put on 104 off only 118 balls. Pant fell excruciatingly short of his second hundred on home soil, and was bowled by Suranga Lakmal (1-63).

“We all know how he (Pant) bats, and it was a special innings today,” Vihari said. “He helped us get to 350-plus on the first day, which will be helpful going forward.”

Jadeja was unbeaten on 45 runs and closed out the day with Ravichandran Ashwin (10 not out).

Earlier, India was 109-2 at lunch after opting to bat.

Rohit Sharma (29) combined with Mayank Agarwal (33) in a 52-run opening partnership, scoring at above five runs an over, in his first test as India captain.

Sharma pulled a delivery from Lahiru Kumara (1-52) and was caught at fine leg in the 10th over.

Vihari went in at No. 3 and put on 28 runs with Agarwal for the second wicket as Sri Lanka brought the run-rate under check.

“I am happy to bat where the team wants me to, but No. 3 is my preferred spot,” Vihari said. “I was batting well, and the ball was coming onto the bat initially. But once the ball was old, it was difficult to time it.”

Embuldeniya made the second breakthrough for Sri Lanka, when he trapped Agarwal lbw.

The match in Mohali also marks Sri Lanka’s 300th test. Skipper Dimuth Karunaratne said he also would have chosen to bat first if he had won the toss, aiming to end a run of 20 tests in India without a victory.