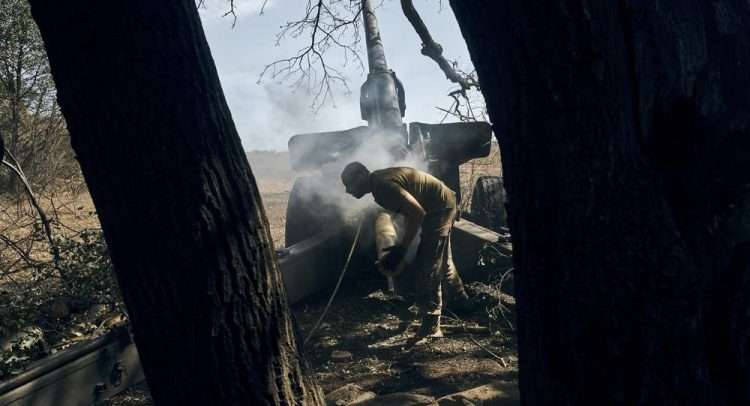 KYIV, Ukraine (AP) — Western sanctions on Russia over its war in Ukraine are to blame for stoppages in Moscow’s supply of natural gas to Europe, a senior Kremlin official claimed Monday.

In some of the bluntest comments yet on the standoff between Moscow and Western Europe over energy supplies, Kremlin spokesman Dmitry Peskov said problems with pumping the gas occurred “because of the sanctions.”

“Other reasons that would cause problems with the pumping don’t exist,” Peskov claimed.

The sanctions on Moscow and Russian companies have created problems with equipment maintenance, he said, though that claim has been refuted by Western governments and engineers.

Russian energy company Gazprom announced Friday that a suspension of gas supplies heading westwards through the Nord Stream 1 pipeline would be extended indefinitely because oil leaks in turbines need fixing.

High energy prices and possible shortages this winter in Western Europe have set alarm bells ringing among governments, notably those in the European Union.

Peskov laid the blame for the disruption firmly at the door of the sanctions, which he claimed have prevented machinery from working properly, even though experts say that isn’t true.

German officials have rejected those explanations, saying they are merely a political power play. Germany’s Siemens Energy, which manufactured turbines the Nord Stream 1 pipeline uses, said turbine leaks can be fixed while gas continues to flow through the pipeline.

Also in the energy sector, tension still gripped Europe’s largest nuclear plant Monday, a day before U.N. inspectors were due to report on their efforts to avert a potential disaster at the Ukrainian site that has been engulfed by Russia’s war on its neighbor.

The Russian military accused Ukrainian forces of staging “provocations” at the Zaporizhzhia plant, which lies within a Russian-installed administrative area.

Russia’s Defense Ministry claimed that Kyiv’s forces on Sunday targeted the territory of the plant with a drone, which it said Russian troops were able to shoot down.

The two sides have traded accusations about endangering the plant, which the Kremlin’s forces have held since early March. The plant’s Ukrainian staff continue to operate it.

In a perilous mission, experts with the International Atomic Energy Agency traveled through the war zone to reach the plant last week.

Four of six U.N. nuclear agency inspectors have completed their work and left the site, Energoatom, Ukraine’s state nuclear power plant operator, said Monday. Two of the experts are expected to stay at the plant on a permanent basis, Energoatom said.

Ukraine’s presidential adviser, Mykhailo Podolyak, applauded the IAEA’s decision to leave some experts at the plant.

“There is a number of our workers there, who need some kind of protection, people from the international community standing by their side and telling (Russian troops): ‘Don’t touch these people, let them work,’” he added.

The U.N. inspectors are scheduled to brief the Security Council on Tuesday about what they found out on their visit. The plant is largely crippled, amid a grinding war that has clobbered energy markets.

Elsewhere, the fighting raged on for a seventh month, with Ukraine’s presidential office saying Monday at least four civilians were killed and seven others were wounded by new Russian shelling across several regions of Ukraine.

Most of the casualties were in the eastern Donetsk region, where three people were killed and four were wounded. A large chunk of Donetsk is held by Russian-allied separatists.

Meanwhile, a counteroffensive by Ukrainian forces “is making verifiable progress in the south and the east” of the country, the Washington-based Institute for the Study of War said.

“The pace of the counteroffensive will likely change dramatically from day to day as Ukrainian forces work to starve the Russians of necessary supplies, disrupt their command and control, and weaken their morale even as counteroffensive ground assaults continue,” the institute said late Sunday.

In the eastern city of Sloviansk, personnel at the Ukrainian Red Cross Society swept up debris Monday from a second rocket attack on its premises in a week.

Nobody was hurt in either attack, said Taras Logginov, head of the agency’s rapid response unit. He blamed Russia forces and accused them of war crimes for the attacks.

In a row of apartment buildings across the road, the few residents who haven’t evacuated sawed sheets of plywood to board up their shattered windows.

Henadii Sydorenko sat on the porch of his apartment building for a break. He said he’s not sure whether to stay or leave, torn between his responsibility of taking care of three apartments whose owners have already evacuated and the increasing fear because of the now frequent shelling of Sloviansk.

“It’s frightening,” the 57-year-old said of the shelling. “I’m losing my mind, little by little.”

Ukrainian President Volodymyr Zelenskyy said Kyiv’s forces had liberated three settlements — two in the south and one in the east, in the Donetsk region. He didn’t provide names of the settlements in his comments on Sunday night.

Amid increased Ukrainian strikes on the occupied Kherson region, Russian-installed authorities there said that for security reasons they were putting on hold their plans for a local referendum on whether the region should formally become part of Russia.