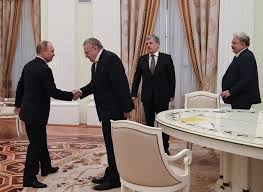 Kremlin Credits the West for Big Turnout for Putin

The Kremlin gave credit to a surprising source for the outpouring of support for Vladimir V. Putin in Sunday’s presidential election — the West.

Ella A. Pamfilova, the chairman of the Central Election Commission, said pressure on Russia from Western leaders — helped to generate the 76.7 percent support for Mr. Putin.

“Our people always unite when the chips are down,” Ms. Pamfilova said on live television, in what appeared to be a reference to what Britain has said was a Russian nerve agent attack on one of its former spies, Sergei V. Skripal, and his daughter in Salisbury, England.

“That’s why a big thanks to certain leaders, I won’t name them, of Western states, who also made their positive contribution, which contributed to the consolidation and unification of our people,” she added.

Mr. Putin’s campaign spokesman, Andrei Kondrashov, was more explicit, saying, “Thanks to Britain, they’ve ensured a level of turnout we weren’t hoping to achieve by ourselves.”

Continue reading the main story
The Kremlin propaganda machine swung into action spreading that same message, that the results of the vote on Sunday were a rebuke to the West and a sign that Russia cannot be intimidated and should not be threatened.

“Before he was simply our president and he could be changed. But now he is our vozhd,” wrote Margarita Simonyan, the editor in chief of the Kremlin’s main foreign-language bullhorn, the RT broadcast network, on Twitter. “And we will not allow him to be changed. And you did this yourselves.”

Vozhd is an old Russian word for chieftain, most commonly applied to Soviet rulers like Lenin and Stalin.

Indeed, some commentators found parallels between the vote on Sunday and its Soviet-era antecedents. There was no real competition and no concrete discussion of issues. The front-runner neither participated in any debates nor laid out a campaign platform. As a result, there is now no real sense of what, if anything, the vozhd will do with his mandate.

“The election results should be compared not with democracies, but with the Soviet Union,” wrote Ivan Kurilla, a historian, on Facebook. “Back then it was 99.9%, and now it’s 75%. It’s precisely by that 24% that today’s elections are freer than Soviet ones.”

Observers from the Organization for Security and Cooperation in Europe also found the entire process wanting, if well organized. “Overall, the campaign was marked by a lack of genuine competition among contestants,” the group’s election observation mission concluded in a statement.

There were also some complaints about irregularities. A few videos of ballot stuffing appeared, although the results from a couple such polling stations were quickly nullified. But critics worried about more sophisticated techniques.

One of those was the new “absentee voting” system that allowed people to vote where they were physically rather than where they were registered. One opposition organizer who said he managed to vote twice using the system was immediately charged with a misdemeanor. But that left open the question of how many people might have been able to abuse the system.

The “electoral sultanates” that previously produced whopping numbers for Mr. Putin also seemed to have curbed their enthusiasm. In previous years the Republic of Chechnya, for example, habitually awarded Mr. Putin more than 99 percent of the vote with more than 99 percent turnout. This year it was a slightly more temperate 91.5 percent on both scales.

Over all, Mr. Putin received some 56.4 million votes out of more than 110 million eligible voters, the most ever cast for a Russian president. Turnout was 67.5 percent. The closest candidate to him was Pavel N. Grudinin from the Communist Party with 11.78 percent, followed by Vladimir V. Zhirinovsky, a right-wing nationalist, with 5.65 percent. Ksenia A. Sobchak, the only woman, attracted just 1.68 percent.

What effort Mr. Putin did make toward defining the next six years and his fourth term as president came in a March 1 state of the nation address, in which he promised to sharply increase social spending and to develop a whole new generation of nuclear weapons unlike any the world has ever seen. (Some were already operational, he claimed.)

Critics worried that it was all part of a set piece of continued confrontation that started with the annexation of Crimea and the uprising in eastern Ukraine, and continued with the Skripal case.

There was also no clear explanation of how Russia, with its stagnant economy, would pay for it all, but it certainly would mean abandoning the previous plan of turning Russia into a center of high-tech industries integrated into the global financial system, said Konstantin Gaaze, an analyst who writes frequently for the Carnegie Moscow Center.

“It is the Soviet model,” Mr. Gaaze said. “Sell more oil and send more money to research and development. Both schemes were tested in the late Soviet economy and both failed.”

Some experts dismissed the guns and butter speech as just so much campaign rhetoric that would go the way of other such promises and decrees, like the assurances of economic and social welfare improvements that Mr. Putin made the time of his last inauguration in May 2012.

From the point of view of these experts, the overwhelming choice of Mr. Putin was rooted in his establishment of stability and rising living standards, especially after the chaotic 1990s, and pride in the rebuilt military and the country’s higher standing in the world.

The mood, said Evgeny Gontmakher, a prominent economist, was that “only Putin can provide for us.” The current federal budget projects a growth of 2 percent for each of the next three years, he noted, modest but enough to underwrite basic needs without pronounced change.

Indeed, no voters interviewed at random in polling stations around Moscow mentioned “national consolidation” in confrontation with the West as the reason they chose Mr. Putin, but plenty mentioned the economy.

“We need to improve the economy now,” said Irina I. Kuzmenko, who teaches the tenets of the Russian Orthodox faith to children, speaking after voting for Mr. Putin. “Lots of factories are lying in tatters.”

Later Sunday, as Mr. Putin moved between victory celebrations near the Kremlin, one man was shown on television telling him he needed to focus on the economy. “The people are asking that you do the same with the economy that you did with the army,” the man said.

Mr. Putin did not respond directly, saying that it was important for all political forces to act according to “their common interests.”

“This is a very Soviet slogan,” said Natalya V. Zubarevich, an expert in social and political geography at Moscow State University, noting that the mandate made it easier for Mr. Putin to do whatever he wanted. “It means gathering around the flag and maintaining patience when things are not so good.”

They will need that patience, say many Western economists, who have attributed Russia’s poor economic performance to the corruption and cronyism of the system Mr. Putin created and doubt it will much improve until that changes.

The steady parade of Soviet memes fed speculation that the next piece of Soviet heritage that Mr. Putin might try to resurrect was erasing the term limits in the Constitution and returning to the leader-for-life Politburo system.

Mr. Putin scoffed when asked about the idea on Sunday night, but others are not so sure, saying he may find it easier to change the Constitution and become president for life than to try to manage the succession struggle that would ensue when he steps down.

However, while neighbors like China and Kazakhstan have found ways to keep their current leaders in place indefinitely, he noted, Russia needs a more rigid structure. “In Russia there is no tradition of being the ayatollah without serious formal steps,” said Nikolai Petrov, a political scientist at the Moscow Higher School of Economics.

If Mr. Putin’s acolytes and supporters exulted at his victory, it left his critics with the uneasy sense that the leader would use his mandate to continue his campaign to muzzle the news media and restrict other civil liberties.

Yevgeny Roizman, the mayor of Yekaterinburg and a rare elected independent politician, wrote on Twitter: “Life will get worse and worse, and at each subsequent election the turnout will be bigger and bigger, the rating of the President will be higher and higher and North Korea will be closer and closer.”