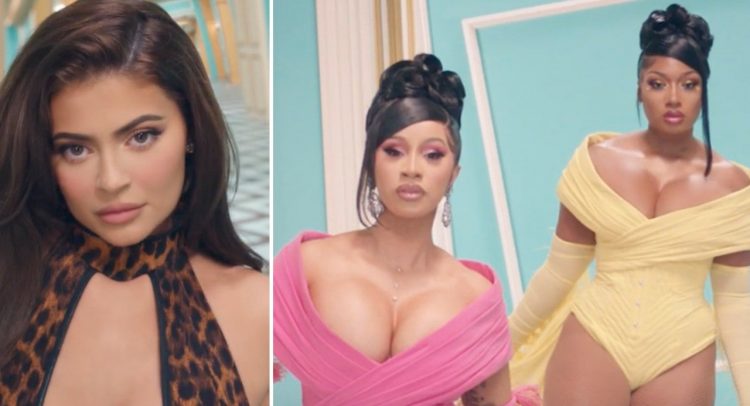 The Cardi B and Megan Thee Stallion dream collab we’ve all patiently been waiting for is finally here — and Kylie Jenner appears in their music video.

The superstar rappers dropped their new song and music video for “WAP” late Thursday, and needless to say, we wouldn’t expect anything less. Kylie isn’t the only celeb who makes a surprise appearance in the video, as Rosalia and Normani, and more stars also have cameos.

“I just want to let y’all know, I wanna give you a heads up, with the music video, it’s going to be the censored version of the song, because the song is so nasty that YouTube was like, ‘Hold on, wait a minute, song might be too goddamn nasty,” Cardi teased in a video shared to Instagram hours before the launch. “So make sure you get the real s**t on all streaming platforms.”

Fans couldn’t get enough when the video for the song — which samples DJ Frank Ski’s 1993 record, “Whores in This House” — finally dropped. Cardi and Megan travel through several colorful scenes inside a mansion, where, of course, there’s plenty of twerking.

Cardi opens up about her and Megan’s star-studded music video on New Music Daily on Apple Music. The full conversation will drop on Apple Music at 9 a.m. PT / 12 p.m. ET.

“I wanted a lot of different females, not just female rappers. … Y’all going to see it on the music video as well, from models to influencers and everything. And I really wanted the video to be very sexy, very clean, very nice, very cut,” Cardi explains.

“I’m like, ‘These are the girls that I personally like. That I like they music. That I really feel they are going to go mainstream, to me,'” she says, praising Rubi Rose, Sukihana and Mulatto.

Watch the video below:

Cardi and Megan announced earlier this week that they’d be dropping the new single on Friday, sharing pics of the cover art across their social media platforms.

Fans were first alerted to Kylie and Megan’s friendship as they spent time together by the pool last month.