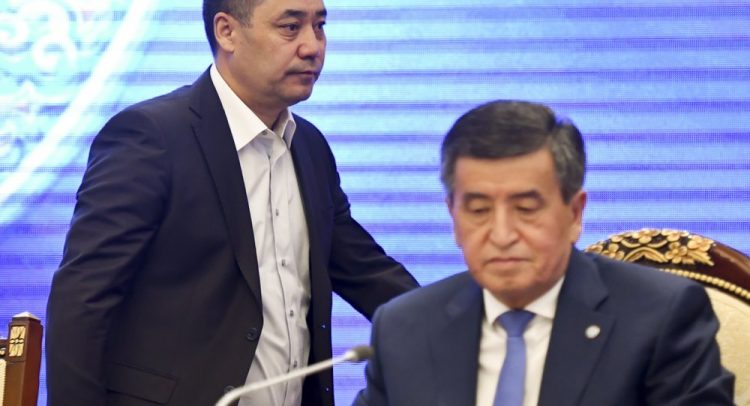 Kyrgyzstan’s prime minister became the acting head of state Friday in the wake of the president’s resignation amid turmoil sparked by a disputed parliamentary election.

Supporters of newly appointed Prime Minister Sadyr Zhaparov, rallied in the capital, Bishkek, and threatened to storm government buildings, forcing President Sooronbai Jeenbekov to step down Thursday. Under the constitution, the speaker of parliament would be next in line, but he refused to serve as caretaker leader under protesters’ pressure, allowing Zhaparov to claim the top office.

The fast-moving developments mark the third time in 15 years that a leader of the Central Asian country has been forced out by a popular uprising. The unrest that gripped the country of 6.5 million people on the border with China was triggered by the Oct. 4 parliamentary election that was swept by pro-government parties.

Supporters of opposition groups dismissed the results, pointing at vote-buying and other irregularities, and took over government buildings hours after the polls closed. The protesters freed several opposition leaders, including Zhaparov, who was serving an 11-year jail term.

The Central Election Commission nullified the election results and rival regional clans begun jockeying for power, their supporters swarming the capital and occasionally clashing with each other, hurling stones.

President Jeenbekov, who had introduced a state of emergency in Bishkek and deployed troops in the capital, first dismissed calls to resign, but he announced Thursday that he was stepping down to avoid bloodshed.

Zhaparov’s supporters quickly besieged the parliament to discourage its speaker, Kanat Isayev, from taking over as acting president.

Isayev formally announced during Friday’s parliament session that he wouldn’t take the top office, clearing the path for Zhaparov to take the helm.

Zhaparov said the country must quickly hold the new parliamentary and presidential elections, but specific dates haven’t been set yet.

The parliament on Friday lifted the state of emergency in Bishkek that Jeenbekov introduced earlier this week amid the unrest that fueled fears of the violence and looting that accompanied previous uprisings. Such concerns subsided as the troops deployed around the capital and the situation has stabilized, Stores and banks that were closed last week have reopened.

As in the uprisings that ousted presidents in 2005 and 2010, the current unrest has been driven by clan rivalries that dominate the country’s politics.

Kyrgyzstan, one of the poorest countries to emerge from the former Soviet Union, is a member of Russia-dominated economic and security alliances, hosts a Russian air base and depends on Moscow’s economic support. It formerly was the site of a U.S. air base that was used in the war in Afghanistan.

Man dies after being hit by motorbike