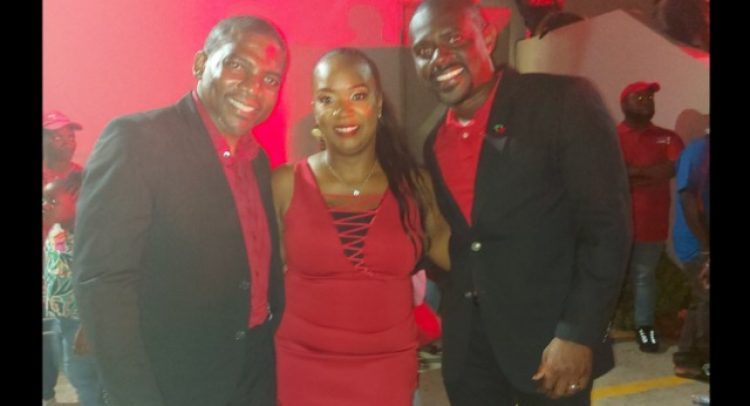 Basseterre, 4th April, 2022, (MyVue News.com)-The opposition St. Kitts-Nevis Labour, (SKNLP), has launched its new candidates for the next general elections that many are speculating could be called before they are constitutionally due in 2025.

The two candidates were launched at a Sunday afternoon rally at the CUNY parking lot in the West Basseterre Constituency, which the party lost for the first time in the 2020 poll, after holding that district since Adult Suffrage in 1952.

Entering the trail for the first time is lawyer Marsha Henderson, who takes over the mantle from Marcella Liburd, another lawyer, who held the district for two terms but lost to yet another lawyer in 2020, Jonel Powell, the current Chairman of PAM and the Minister of Education, Youth Sport & Culture.

Whenever the next elections are announced, the party will be led, for the first time, by its new leader, Dr. Terrence Drew, who took over from long-time president and former prime minister, Dr. Denzil Douglas, after their annual convention last year.

The other newcomer in the lineup is Samal Duggins- a businessman, who is hoping for an upset in Constituency 4-running from Challengers to Halfway Tree.

The incumbent is Deputy Leader of PAM and Minister of Tourism, Lindsay Grant, (a lawyer).

No candidates, from the party, will be fielded for the three seats in Nevis, which are currently held by the CCM.

The present composition of the National Assembly sees Labour with 2 seats, CCM 3, PLP 2, and PAM 4.

Vance was a patriot says his former cricket teammate