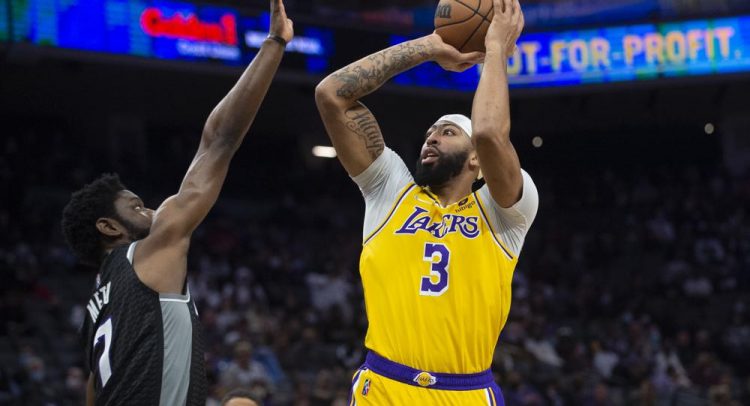 The Lakers sent James home earlier in the day after he was placed in the NBA’s health and safety protocol. Davis said James told him he felt good and was asymptomatic, but the Lakers will have to play at least a few games without him.

“We still have to find ways to win,” Davis said. “We can’t let that affect us. Obviously, he’s a huge part of our team. But we’ve played a huge amount of games without him. So we kind of know how that is already. We’ve got to continue to play like we did on the defensive end until he’s able to come back.”

The Lakers got more than enough from their other two big stars and took over with a dominant third quarter to win back-to-back games for the first time since Nov. 8-10.

The Kings opened a 66-52 lead early in the third before the Lakers outscored them by 27 points over the final 9:15 of the quarter to take a 13-point lead heading into the fourth.

“Every now and then, a coach has to light a fire under his team,” coach Frank Vogel said. “Today was one of those games. We weren’t giving the necessary effort to transition defense and with our pick-and-roll coverages. … Sometimes you have to let them hear about it.”

Westbrook scored 11 points and Davis had eight during the stretch, including back-to-back baskets that gave Los Angeles the lead for good.

“My job and Russ’ is not to feel like we have to do it all, but we have to also do enough to help our guys,” Davis said. “I think tonight we did enough and also guys stepped up. It’s not just going to be on me and Russ. It’s a team thing. But me and Russ as the head of the snake, we’ve got to be able to continue to lead these guys until LeBron comes back.”

Sacramento missed 17 of 18 shots from the field during a stretch that lasted into the fourth quarter. The Kings fell to 2-3 under interim coach Alvin Gentry.

Richaun Holmes scored 27 points on 12-for-13 shooting in his first game back after missing three with an illness. De’Aaron Fox added 17 but also had seven turnovers.

“I want to apologize to every Kings fan out there because you do not deserve this,” Gentry said. “The second half was a disaster and it was an embarrassment. We can’t do what we did in the second half. … The fans don’t deserve that.”

James has missed 12 of the first 23 games this season for the Lakers because of injuries, a suspension and now this latest setback that should sideline him for multiple games. The team is 7-4 with James and 5-7 without him after the win over the Kings.

“We’re different now than we were three weeks ago or when that first time he went out was,” Vogel said before the game. “Hopefully we’ll have more success this time around.”

Kings: F Marvin Bagley (non-COVID-19 illness), F Moe Harkless (knee) and F Harrison Barnes (foot) all missed the game. … Sacramento shot 55.6% in the first half and 28.6% in the second half.

Kings: Visit the Clippers on Wednesday.