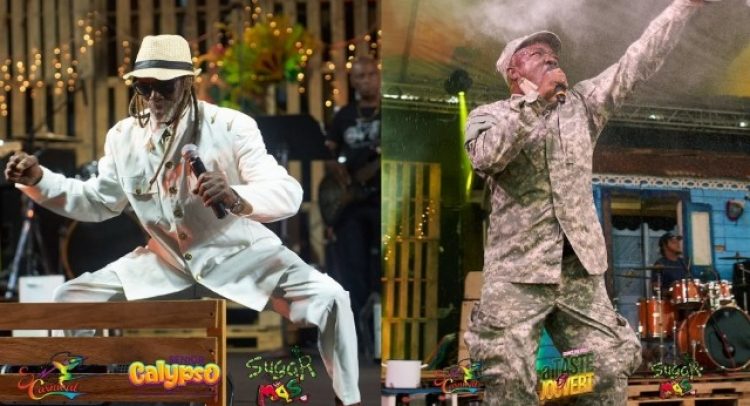 Lala & Mr.World to be recognized at Prize-giving on Wednesday

Basseterre, 26th January, 2021 (MyVue News.com)- Two of the longest serving entertainers in St. Kitts & Nevis will be recognized by the National Carnival Committee, when the official VIRTUAL Prize-giving Ceremony for Sugar Mas 49 is hosted this Wednesday, 27th January, 2021.

At the ceremony, there will also be performances from the Panorama Champions- EBJ Harmonics, Senior Calypso Monarch- QueenyG and Lala. Winners of Panorama and from the Calypso Finals will be presented with their prizes.

Minister of Culture, Hon. Jonel Powell and Carnival Chair, Shannon Hawley will make brief remarks, reflecting on the 2020 celebrations and providing a look into this year’s Golden 50th Anniversary of Sugar Mas, in December.

The Carnival Committee revealed that the two being honored are King Lala, (Clement Williams) and Mr. World, (Royston Wigley).

Both entertainers have been making sterling contributions to the development and promotion of carnival for decades, producing memorable calypso hits that have become classics, cherished by loyal fans.

The Chairwoman Shannon Hawley, said that there are so many local artistes who have contributed to the effort to build and preserve our cultural art form, and it is necessary to begin the process of giving recognition for their tremendous work, starting with Lala and Mr. World.

It was back in the early 1970s when Lala launched his career in music, performing first as a reggae artiste and later forming a two man group called Lala & Iroy. He also joined forces at one point with De General, another entertainer from St. Johnston Village.

In the 1970s Lala was a regular feature with bands such as Grand Ash Two, Val Morris Orchestra, Heatwave and is currently a main attraction in the Grand Masters Calypso Tent. His hits include “I Ain’t in No Hurry”, “Hold On” and from carnival 2020, “Keeping We Carnival at Home”, which many said is the unofficial Road March tune for 2020.

Due to the Coronavirus, some of the traditional events like J’ouvert, Parade Day and Last Lap, were excluded from the calendar of events, and there was no competition for the annual Road March title.

During the 50 plus years of his career, Lala has never missed a carnival celebration and has always made his contribution.

When it comes to the Mr. World and the Small Axe Band, fans hail them as the “sweetest band in the world”, and there is no doubt that since 1985, Mr. World has been a critical ingredient in the recipe of success enjoyed by the band, which has the record for the most Road March titles, (12), in St. Kitts & Nevis.

During his time in the band Mr. World has contributed, either as a writer or vocalist, to hits such as Bottom in de Road, Drop de Soap, Hardware and others.

He has the enviable record of being the longest serving lead vocalist of any band in St. Kitts & Nevis.

Mr. World started his career with the Small Axe Band, back in 1985.

The award ceremony and Prize-giving will be broadcast on Radio stations of ZIZ, WINN FM and Freedom FM, and is also scheduled to be aired on ZIZ Television and streamed on multiple social media platforms including: Facebook@SKNCARNIVAL; YouTube@SKNCARNIVAL.

Main Photo: (L-R) Lala and Mr. World performing at one of the Sugar Mas 49 Virtual events

Cases move to 37 but only 2 active