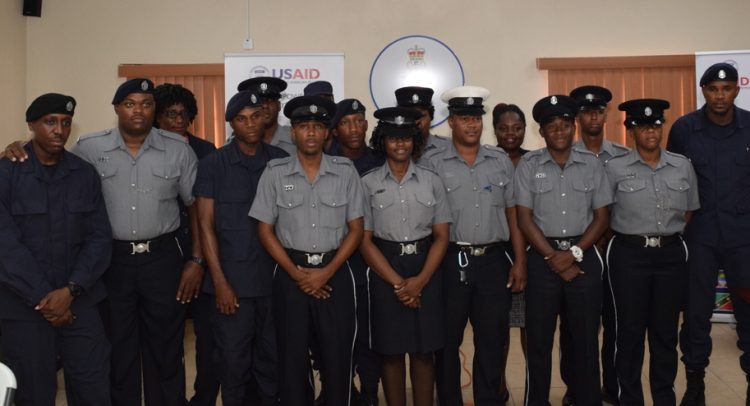 Basseterre, St. Kitts, May 27, 2018 (SKNIS): Ninety-six uniformed security forces and service providers in Juvenile Justice in St. Kitts and Nevis were encouraged to use the recently completed two weeks of intense training aimed at sensitizing law enforcement officers on the juvenile justice reform process as a stepping stone for dealing with juveniles.

The training was facilitated by the Organization of Eastern Caribbean States (OECS), in collaboration with the Ministry of Community Development, Gender Affairs and Social Services; and the Ministry of National Security comprised of Police, Prison and Defense Force officers.

Leonard Terrance, Deputy Commissioner-Department of Corrections in Saint Lucia and Course Co-facilitator, said that there are other ways and means of ensuring that juveniles do not end up in problems with the law.

“We have looked at diversion where we try to keep the young people off the dangerous road and trying to ensure that not every offence requires them to be in a custodial setting. There are things that we can do; there are things that are available right here in the Federation of St. Kitts and Nevis that we can utilize and not simply the first option of using the prison or juvenile rehabilitation centre,” said the deputy commissioner.

He touched on an important part of the training which had to do with the Child Justice Act, noting that this stood out most for him as it is important to have such an Act in place.

“The Act for me was one of the most interesting aspect of that whole presentation because it is the Act that is going to set the foundation. It speaks to what police can do and it speaks to the various things that should be done and even then, you realized that there is still room for debate on how that Act can be perfected,” he stated.

Azilla Clarke, Focal Point for Juvenile Justice Reform Project (JJRP) in St. Kitts and Nevis, thanked the representatives from the OECS Commission, Leonard Terrance and Magistrate Gloria Augustus, for offering the training to the officers. She also expressed thanks to the participants for the effort they placed in ensuring that they are up-to-date with juvenile justice reform in St. Kitts and Nevis, especially where the Act is concerned.

“The Act is the cornerstone legislation that deals with juvenile justice for the Federation of St. Kitts and Nevis. The training went beyond simply considering the Act to helping us to understand the minds of juveniles and also to understand the rights-based support which is necessary now with dealing with juveniles,” she said, adding that the JJRP has assisted that nation in strengthening its juvenile justice sector.

Under the USD$5.8 million regional project, St. Kitts and Nevis received USD$900,000 to support reform efforts, including the provision of training, capacity building, and technical assistance to the New Horizons Rehabilitation Center, the Magistrates Court, and the Department of Probation and Child Services. More than 150 juvenile justice officials and media personnel were also exposed to child-centered techniques, tools, and modern approaches to improve the care, treatment, and advocacy for vulnerable youth.

The Juvenile Justice Reform Project 2 targets youth aged 18 and below who are in conflict with the law, that is, who have committed offences for which they could be prosecuted under the existing legislative framework in Antigua and Barbuda, Commonwealth of Dominica, Grenada, Saint Lucia, St. Kitts and Nevis and St. Vincent and the Grenadines.

Region urged to brace for wetter than usual period of rain

EU proposes ban on straws and other single-use plastics