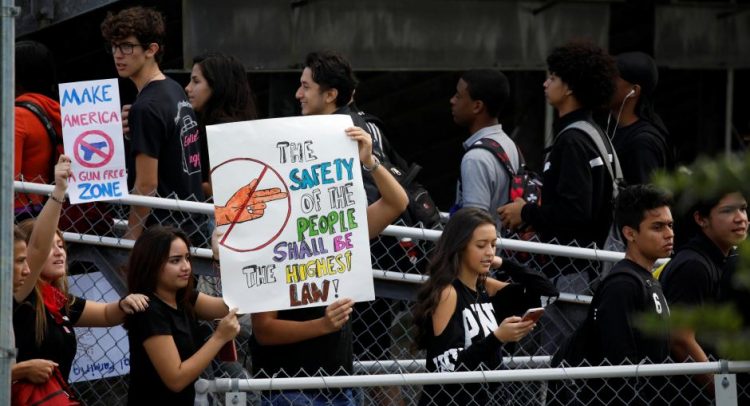 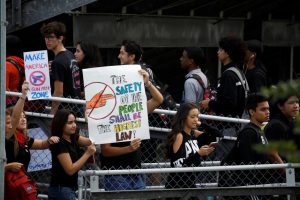 Some wore T-shirts and carried signs reading “We call B.S.,” one of the slogans of the movement started by students of Marjory Stoneman Douglas High School in Parkland, Florida, where 17 students and educators were slain by a gunman with an AR-15 semiautomatic assault rifle in the second-deadliest shooting at a U.S. public school.

Investigators said the assault was carried out by 19-year-old former Stoneman student Nikolas Cruz, who purchased an AR-15 nearly a year ago. Police charged Cruz, who had been kicked out of the school due to disciplinary problems, with 17 counts of premeditated murder.

“Nikolas Cruz was able to purchase an assault rifle before he was able to buy a beer,” said Laurenzo Prado, a Stoneman junior, referring to a Florida law that allows people as young as 18 to buy assault weapons. “The laws of the country have failed.”

Florida lawmakers in Tallahassee said they would consider raising the age limit to 21, the same standard for handguns and alcohol, though the state Senate on Wednesday opted not to take up a gun control measure.

Florida Senate President Joe Negron, a Republican, met with students and declined to answer their questions on whether he would support any specific gun control measures.

“That’s an issue we’re going to look at as we work to develop legislation,” he said.

The legislative session wraps up on March 9.

More than 100 missing after school attack