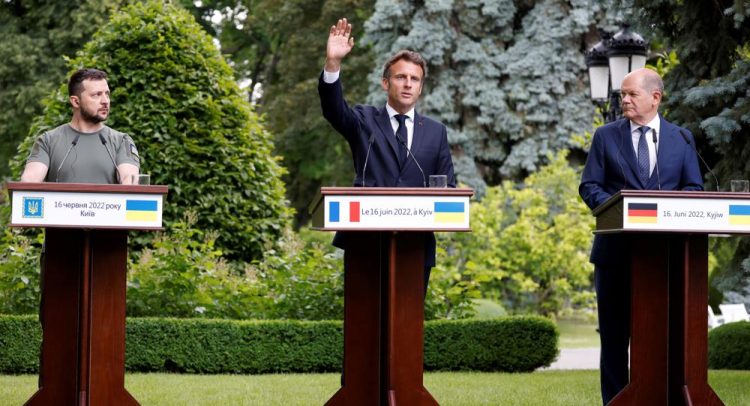 By JOHN LEICESTER and SYLVIE CORBET

KYIV, Ukraine (AP) — Four European leaders expressed their support for Ukraine on Thursday while meeting with President Volodymyr Zelenskyy, vowing to back Kyiv’s candidacy to eventually join the European Union and offering more weapons to fend off Russia’s invasion.

French President Emmanuel Macron promised Ukraine six more truck-mounted artillery guns, the latest in a new round of Western arms pledges as the war grinds on in the Donbas region in the east.

France, Germany, Italy and Romania “are doing everything so that Ukraine alone can decide its fate,” Macron said at a news conference with Zelenskyy and the others.

“My colleagues and I have come here to Kyiv today with a clear message: Ukraine belongs to the European family,” said German Chancellor Olaf Scholz.

Amid Ukrainian fears that Western resolve could wane, the visit carried heavy symbolism. France, Germany and Italy have all faced criticism for continuing to engage with Russian President Vladimir Putin — and failing to give Kyiv the amount of weaponry it says its needs.

With Scholz beside him, Macron defended earlier comments that riled Ukrainians about not humiliating Russia. He solemnly noted how the end of World War I had sown the seeds of World War II.

“We are side by side today with Chancellor Scholz. One hundred years ago, we were at war and allies helped France win. France committed a historic mistake. It lost the peace because it wanted to humiliate Germany. The question of humiliation I always placed in a context to come, not the current context,” he said.

“Today, this war must be won, France clearly supports Ukraine so it prevails,” Macron said. “Germany, like France, will never be in situations where they negotiate on Ukraine’s behalf with Russia. Moreover, we have never done that.”

Ukrainians and some of their central European neighbors also have been afraid that Western powers might press for territorial concessions for the sake of peace with Russia.

Scholz reiterated that there is no such intent to dictate anything to Ukrainians, and that only they “can decide what is right in terms of an agreement on a peace which we are unfortunately very, very far away from.”

Italian Premier Mario Draghi expressed concern about the millions of tons of grain backed up in Black Sea ports by the war, saying it could lead to a “worldwide catastrophe.” Italy has been a first destination for African migrants and could find itself overwhelmed in the case of largescale hunger in the Southern Hemisphere.

“We want the atrocities to stop and we want peace,” Draghi said. “But Ukraine must defend itself, and it will be Ukraine that chooses the peace it wants.”

The leaders also visited Irpin, a Kyiv suburb that saw intense fighting early in the war and where many civilians were killed. They decried the destruction there, with Macron saying he saw signs of of “war crimes.”

The U.S. and its European allies have given billions of dollars in weaponry to Ukraine, and Germany and the U.S. recently announced new arms shipments. Such arms have been crucial in preventing the Russians from taking the capital, but Kyiv has said much more will be needed.

“Russia is only looking for new ways to scare Europe and seize more and more of our land,” Zelenskyy said at the news conference. “The goal of Russia in this war is to break Ukraine and through this break the whole of Europe.”

Many in Ukraine hope the visit could mark a turning point by opening the way to significant new arms supplies. It also comes as EU leaders prepare to decide next week on Ukraine’s request to become a candidate for membership in the bloc.

The war has increased pressure on EU governments to fast-track Ukraine’s candidate status, and Thursday’s pledge to support candidacy status for Ukraine and neighboring Moldova pushes the whole 27-nation union closer to doing so. But the process still is expected to take years, and EU members remain divided over how quickly and fully to open their arms to new members.

European allies have sent increasingly powerful weapons and rallied around Ukraine more than many expected, approving waves of unprecedented sanctions against Russia that also are badly squeezing Europe’s economy.

Ukrainians say more is needed as Russia presses an offensive in the Donbas region, slowly but steadily gaining ground on the outmanned and outgunned Ukrainian forces.

After the news conference, Zelenskyy made a digital appearance at technology shows in Paris, Amsterdam, London and Stockholm as what organizers called a 3D avatar, with his image on a large screen. Wearing a T-shirt emblazoned with futuristic fighters and the text “Come to the Dark Side” and “Dominate or Die,” he urged countries to support what he called a “digital Lend Lease” for Ukraine to bounce back from the war with a “global digital revolution.”

While visiting Irpin, Scholz said officials must keep the scenes of destruction in mind in all their decisions.

“Innocent civilians have been hit, houses have been destroyed; a whole town has been destroyed in which there was no military infrastructure at all,” he said. “And that says a great deal about the brutality of the Russian war of aggression, which is simply out for destruction and conquest.”

Macron, Scholz and Draghi, representing the EU’s three largest economies, traveled to Kyiv together on a special overnight train provided by the Ukrainian authorities. They have been criticized for not visiting sooner. Soon after they arrived, air raid sirens wailed.

President Klaus Iohannis of Romania, which borders Ukraine and has been a key destination for its refugees, arrived on a separate train. He said at the news conference that Romania is facilitating the transit of Ukrainian exports, including grain.

A number of other European leaders have already made the trip to show their solidarity with Ukraine, even when the fighting raged closer to the capital than it does now.

Scholz had long resisted traveling to Kyiv, saying he didn’t want to “join the queue of people who do a quick in-out for a photo opportunity,” adding that a trip should focus on doing “concrete things.”

Germany announced Wednesday it will provide Ukraine with three multiple launch rocket systems of the kind that Kyiv has said it urgently needs.

Tamara Malko, a resident of the Donetsk region that is part of the Donbas, said Macron and Scholz had been “very cold” toward Ukrainians so far and hoped their visit would bring change.

“We want peace very much … and have high hopes for Macron and Scholz,” she said. “We want them to see and understand our pain.”

From left, Ukraine President Volodymyr Zelenskyy, France’s President Emmanuel Macron and German Chancellor Olaf Scholz attend a press conference in Kyiv, Thursday, June 16, 2022. The leaders of four European Union nations visited Ukraine on Thursday, vowing to back Kyiv’s bid to become an official candidate to join the bloc in a high-profile show of support for the country fending off a Russian invasion. (Ludovic Marin, Pool via AP)