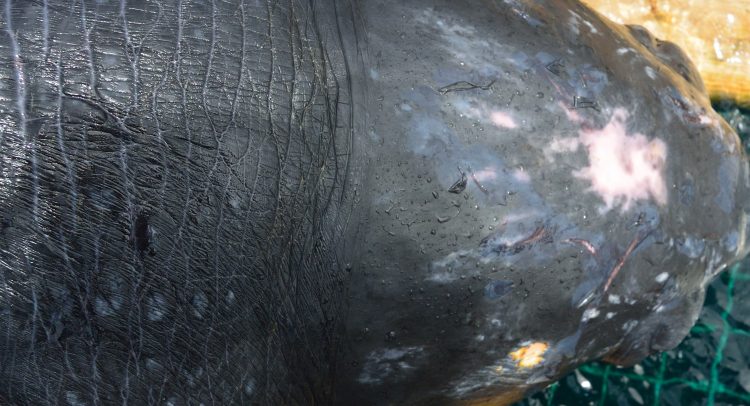 A female leatherback sea turtle bearing tag WC 13427 on its left rear flipper was captured 24 July 2018 off Nova Scotia, Canada by a sea turtle research team led by Dr. Mike James of the Canadian Department of Fisheries and Oceans (www.dfo-mpo.gc.ca/science/publications/article/2016/01-29-16-eng.html). Following capture, the turtle was examined, measured, and equipped with a satellite-linked transmitter, which will provide valuable data on her movements and habitat use for several months.

The St. Kitts Sea Turtle Monitoring Network (SKSTMN) received the exciting news of the capture and satellite tagging of WC 13427 in Canada via Professor Julia Horrocks, Coordinator of the Wider Caribbean Sea Turtle Conservation Network’s (WIDECAST) Marine Turtle Tagging Centre at the University of West Indies in Barbados. Originally tagged by members of the SKSTMN and the Georgia Sea Turtle Center/Jekyll Island Authority on 16 April 2015 while nesting on Keys Beach, the turtle returned to nest there two more times in May 2015, but has not been observed nesting since. As leatherbacks generally nest every two to three years, we hope to see her back in St. Kitts in the future.

It is not unusual for female leatherback turtles in the Atlantic to migrate 2,000 miles or more between their nesting and foraging grounds. The species’ highly migratory nature makes it a shared resource both regionally and internationally and highlights the importance of sharing critical biological information gathered on both the nesting beaches and foraging grounds.

Canadian waters support one of the largest seasonal foraging populations of leatherbacks in the North Atlantic. Beginning in 1999, Dr. James initiated annual vessel-based leatherback monitoring and tagging activities off Nova Scotia. This research is conducted in collaboration with local fishermen and the Canadian Sea Turtle Network (www.seaturtle.ca).

Less than 1 in 1,000 leatherback sea turtle hatchlings will survive to adulthood, and the females that survive will not return to nest on our shores until they are around 25 years of age. Disturbing one of these ancient creatures during nesting carries a fine of EC$5,000. Since the SKSTMN initiated their leatherback tagging efforts in 2005, 259 individual female leatherbacks have been tagged. Over the course of the monitoring program a significant decline in leatherback activity in St. Kitts has been observed. For example in 2003 over 350 nests were documented in St. Kitts but in 2018 that number was down to 11. We urge all citizens to assist in efforts to conserve and protect sea turtles and their habitat. It is critical that the animals we do have in our nesting population survive and continue to produce offspring for our future generations to be able observe.

Please report any sea turtle sightings, nesting events, etc. in St. Kitts to the Sea Turtle Hotline at (869) 764-6664 and/or the St. Kitts Department of Marine Resources at (869) 465-8045. If you are interested in following the movements of this leatherback female please email your request to skturtles@gmail.com.

St. Kitts Sea Turtle Monitoring Network
The St. Kitts Sea Turtle Monitoring Network (SKSTMN) is a registered Non- Governmental Organization (NGO) in St. Kitts and a qualifying Public Charity under the United States Internal Revenue Code Sections 501(c)(3) and 170(b)(1)(A)(vi). The SKSTMN was founded in January 2003 with the mission to: implement a long standing sea turtle conservation management program under the direction of the St. Kitts Department of Marine Resources; promote community awareness of the plight of sea turtles; and provide non consumable sources of income to communities as an alternative to the sea turtle harvest in an effort to decrease pressure on St. Kitts turtle populations. For more information on the SKSTMN visit www.stkittsturtles.org.

What exactly is medical marijuana, and how will Jamaica develop the requisite medical standards?