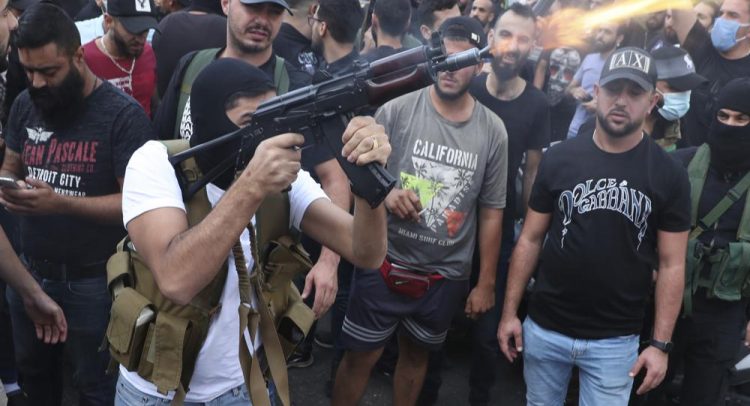 BEIRUT (AP) — Lebanon on Friday mourned seven people killed in gunbattles in the streets of Beirut the previous day, a confrontation that erupted over a long-running probe into last year’s massive port blast in the city and raised fears of the country being drawn into further violence.

Underlying the violence are Lebanon’s entrenched sectarian divides and growing pushback against the port investigation by the two main Shiite Muslim parties, the powerful Hezbollah militant group and its allied Amal Movement.

Schools, banks and government offices across Lebanon shut down for a day of mourning Friday, while funerals were held in several parts of the country.

At a cemetery in a southern suburb of Beirut, Hezbollah members in military uniforms paid their respects, standing before three coffins draped with the group’s yellow flag and covered with white roses. Senior Hezbollah officials were present. Hundreds of women, dressed in black robes, also attended the funeral.

At a separate funeral for an Amal fighter, also in southern Beirut, gunmen opened fire in the air for several minutes.

Thursday’s clashes saw gunmen battling each other for several hours with automatic weapons and rocket-propelled grenades in the streets of Beirut. It was the most violent confrontation in the city in years, echoing the nation’s darkest era of the 1975-90 civil war.

The firefight raised the specter of a return to sectarian violence in a country already struggling through one of the world’s worst economic crises of the past 150 years.

The violence broke out at a protest organized by Hezbollah and Amal which called for the removal of the lead judge investigating last year’s massive explosion at Beirut port. Officials from both parties have suggested the judge’s investigation is heading toward holding them responsible for the blast, which killed at least 215 people.

Many of the protesters on Thursday had been armed.

Ali Haidar, a 23-year-old Shiite who took part in the protest, said nearby residents first started throwing rocks, bottles and furniture, before snipers on rooftops opened fire on the protesters from two directions, leaving people stuck in the middle.

“Then everyone started defending their neighborhood,” he said.

It was not clear who fired the first shot, but the confrontation quickly devolved into heavy exchanges of gunfire along a former civil war front line separating predominantly Muslim and Christian areas of Beirut.

The death toll rose to seven of Friday, after an man succumbed to his injuries, the Health Ministry said. The dead included two fighters from Hezbollah and three from Amal.

Residents in the Tayouneh area of Beirut, where most of the fighting played out, swept glass from the streets in front of shops and apartment buildings. Soldiers in armored personnel carriers deployed on the streets, and barbed wire was erected at some street entrances. Several cars were still parked in the area, damaged in Thursday’s firefight.

Tayouneh has a huge roundabout that separates Christian and Muslim neighborhoods. Newly pockmarked buildings off the roundabout sat next to the ones scarred from the days of the civil war.

One of those killed in the neighborhood was identified as Mariam Farhat, a mother of five. She was shot by a sniper bullet as she sat near the door of the balcony of her second floor apartment, her family said Friday.

“We started screaming, she was taken on a stretcher but did not reach the hospital,” said Munira Hamdar, Farhat’s mother-in-law. She said Farhat’s youngest daughter does not know that her mother was killed, and has been staying with her maternal aunt since Thursday.

Farhat was laid to rest Friday, along with the two Hezbollah fighters, in the Hezbollah ceremony in south Beirut. Her casket also draped with a Hezbollah flag.

Tensions over the port blast have contributed to Lebanon’s many troubles, including a currency collapse, hyperinflation, soaring poverty and an energy crisis leading to extended electricity blackouts.

The probe centers on hundreds of tons of ammonium nitrate that were improperly stored at a port warehouse that detonated on Aug. 4, 2020. The blast killed at least 215 people, injured thousands and destroyed parts of nearby neighborhoods. It was one of the largest non-nuclear explosions in history and further devastated the country already beset with political divisions and financial woes.

Judge Tarek Bitar has charged and issued an arrest warrant for Lebanon’s former finance minister, who is a senior member of Amal and a close ally of Hezbollah. Bitar also charged three other former senior government officials with intentional killing and negligence that led to the blast.

Officials from both Shiite parties, as well as Hezbollah leader Hassan Nasrallah, had attacked Bitar for days, accusing him of politicizing the investigation by charging and summoning some officials and not others.

A senior Hezbollah official, Mohammed Daamoush, said in a sermon during Friday prayers that the group will keep pushing to get Bitar removed and “return the port investigation on its right track.” He did not elaborate but analysts close to Hezbollah said they expect Shiite Cabinet ministers and some of their allies to boycott Cabinet meetings.

No Hezbollah officials have so far been charged in the 14-month investigation.

Bitar is the second judge to lead the complicated investigation. His predecessor was removed following legal challenges.

Supporters of the Shiite Amal group fire weapons in the air during the funeral processions of Hassan Jamil Nehmeh, who was killed during yesterday clashes, in the southern Beirut suburb of Dahiyeh, Lebanon, Friday, Oct. 15, 2021. Dozens of gunmen opened fire in the air Friday south of Beirut during the funeral of persons killed in hours of gun battles between heavily armed gunmen the day before that left several people dead and terrorized the residents of Beirut. (AP Photo/Bilal Hussein)