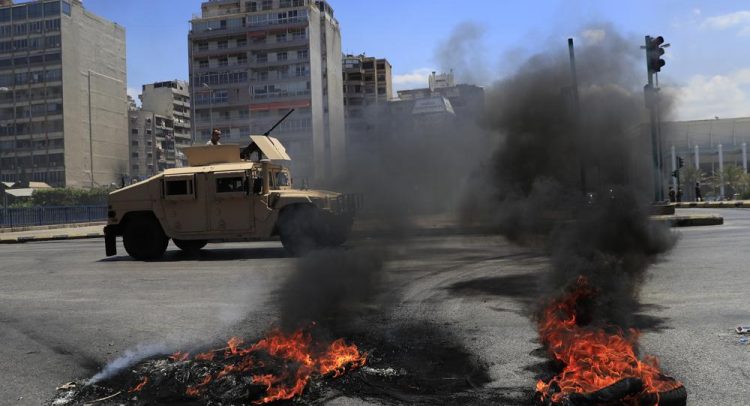 BEIRUT (AP) — Shops, government offices, businesses and banks shuttered their doors in Lebanon on Thursday, as part of a general strike to protest deteriorating economic conditions and press for a government to deal with the worsening political and economic crises.

The strike, which was accompanied by several roadblocks set up around Beirut and other cities, was ironically supported by the very political parties blamed for the months-long deadlock over forming a government. This drew criticism from many activists and commentators, who questioned why those who were driving the economic and financial meltdown were themselves on strike.

Lebanon has been without a fully functioning government since August. Prime Minister-designate Saad Hariri, named to the post in October, has failed to gain support from the presidency over his Cabinet picks — and the two sides have locked horns over who gets more say in shaping a government. The World Bank has described Lebanon’s financial and economic crisis as among the worst in the world in 150 years.

The crisis, festering since 2019, has reached new heights in recent weeks. Fuel has been in short supply, power outages have increased, and medicine — mostly imported — has been missing. Hospitals have closed their labs to outpatients and prices have soared and the value of wages dropped as the national currency, pegged to the dollar for 30 years, is in free fall. On the black market, the Lebanese pound sells at nearly 10 times its official rate to the dollar.

The financial meltdown is threatening to undermine the national army, wiping out soldiers’ salaries and putting unprecedented pressure on the military’s operational abilities. France was holding a fundraiser virtual meeting on Thursday aimed at mobilizing aid, including food, medicine and medical equipment for the Lebanese army. Over 20 countries are expected to take part.

Protesters blocked Beirut’s airport highway with trash bins, setting them on fire, and causing large clouds of black smoke to hang over the motorway. Banks and government offices were shut and several shops in central Beirut were also closed.

Critics ridiculed the ruling elite’s attempt to rally behind the strike. A hashtag on Twitter called “the regime revolts” was trending on Thursday. Memes were posted using pictures from popular anti-government protests in 2019, replacing faces of protesters arrested or dragged by security forces with those of images of prominent politicians.

Amid the crisis, politicians appeared in no rush to form a government that would have to take major, unpopular reform and austerity decisions.

On Wednesday, a public war of words broke out between President Michel Aoun and powerful parliament speaker Nabih Berri, who has offered to mediate the deadlock.

Berri questioned the role of the president in delaying the Cabinet formation — suggesting that Aoun and his Christian party, led by his son-in-law, were seeking enough seats in the government to block decisions. Aoun responded by denying the charges and accusing Berri of siding with the prime minister-designate.

“The system is going on strike against itself while its pillars are fighting among themselves over powers that no longer exist to prove to us who can contribute to our bankruptcy more than the other,” tweeted Samy Gemayel, head of the Kataeb party. He resigned from parliament last year over corruption and a massive explosion in Beirut’s port.

The three leaders “are not living on the same planet as us,” he added.

A Lebanese army humvee passes next of burned tires that set on fire by protesters to block a main highway, during a protest against the increase in prices of consumer goods and the crash of the local currency, in Beirut, Lebanon, Thursday, June 17, 2021. Shops, government offices, businesses and banks shut their doors Thursday in response to a call for a general strike by Lebanon’s main labor union. (AP Photo/Hussein Malla)