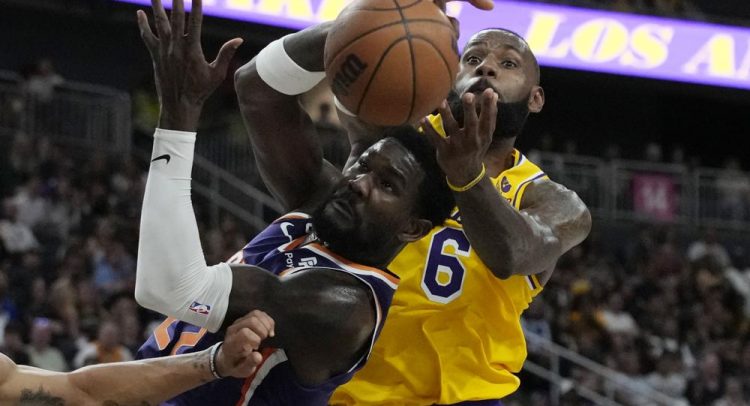 LeBron in Vegas? He makes an expansion pitch to Adam Silver

LAS VEGAS (AP) — LeBron James came to Las Vegas for a preseason game. And a pitch.

James, who has spoken in the past about wanting to eventually own an NBA franchise — with Las Vegas on his mind — has sent another crystal-clear message to Commissioner Adam Silver, reminding him of his plans.

“I know Adam is in Abu Dhabi right now, I believe. But he probably sees every single interview and transcript that comes through from NBA players,” James said after the Lakers’ matchup with the Phoenix Suns on Wednesday night. “So, I want the team here, Adam. Thank you.”

James smiled after finishing that thought, knowing full well that Silver would soon hear every word.

Silver is indeed in Abu Dhabi, for preseason games this week between the Milwaukee Bucks and Atlanta Hawks. The league certainly was aware of James’ remarks; a story about what he said was posted Thursday morning to the NBA website.

Silver has spoken of expansion plans many times in recent years, but there has also been a clear belief that the NBA won’t move forward on adding teams until the next collective bargaining agreement and television deals are complete.

“As I said before, at some point, this league invariably will expand, but it’s not at this moment that we are discussing it,” Silver said earlier this year. “But one of the factors in expanding is the potential dilution of talent.”

James said in June on his show “The Shop: Uninterrupted” that he wants to own a team and wants it to be in Las Vegas, which has long been mentioned as a possible expansion site. The city has become a basketball epicenter of sorts in recent years, playing host to the NBA Summer League — featuring all 30 teams, and often with James sitting courtside for some Lakers games — along with many major USA Basketball events. It’s also the home of the newly crowned WNBA champion Las Vegas Aces and was the site of the 2007 NBA All-Star Game.

Lakers coach Darvin Ham said he thinks “it’s only a matter of time” before Las Vegas gets a team, calling it “a no-brainer.”

“It has rapidly become an NBA market,” Ham said. “When you look at Summer League and that whole layout, the way it’s done now, I remember a day when you barely knew the NBA was in the city during Summer League. And now, it’s like a huge extravaganza. It’s a whole rollout, a whole layout of excitement.”

Fans in Las Vegas gave James loud ovations Wednesday night, and he responded by scoring 23 points in 18 minutes. He appeared in only the first half, making 8 of his 11 shots.

He looked right at home. And if Las Vegas becomes a business home one day, James clearly wouldn’t mind.

“It’s the best fan base in the world and I would love to bring a team here at some point,” James said. “That would be amazing.”

Messi says 2022 World Cup will 'surely' be his last