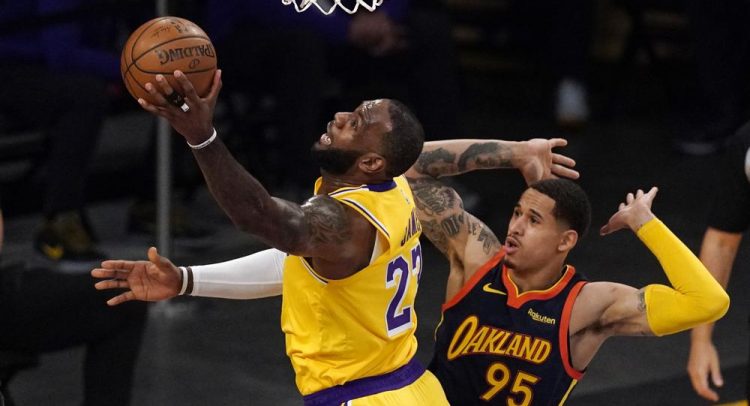 LOS ANGELES (AP) — LeBron James persevered through an injured ankle, a big first-half deficit and being poked in the eye late in the fourth quarter to add another highlight to his impressive resume.

James made a long, go-ahead 3-pointer with 58.2 seconds remaining, rallying the Los Angeles Lakers to a 103-100 victory over the Golden State Warriors in a Western Conference play-in tournament game Wednesday night.

“After the finger to the eye, I was seeing three rims and shot at the middle one. By grace, I was able to knock it down,” said James, who finished with 22 points, 11 rebounds and 10 assists for his sixth triple-double of the season. “I’ve been poked in the eye before.

“It is going to be sore tonight and tomorrow, but we got a big-time win.”

James was poked by Draymond Green while driving to the basket with 2:07 remaining. But he made the biggest shot when the defending NBA champions needed it the most. His 34-foot, 3-pointer over Stephen Curry as the shot clock was winding down is his longest make of the season. According to ESPN Stats and Information, it is also the longest go-ahead shot in the final 3 minutes of any game in his career.

“He proved why he is the best player in the world. Just add it to the list of great plays and accomplishments,” Lakers coach Frank Vogel said.

Anthony Davis scored 13 of his 25 points in the fourth quarter, as the Lakers won their sixth straight and overcame 37 points from league scoring champ Curry.

Golden State had a chance to send it into overtime, but Kent Bazemore had a bad inbounds pass and sealed the victory for the Lakers — who earned the seventh seed for the playoffs and a first-round matchup with second-seeded Phoenix. The series opener is slated for Sunday afternoon.

“It’s a great shot,” Curry said of James’ 3. “Broken play … thinking he was kind of out of the play, they found him, he got his balance just in time and knocked it down. That was a tough one because you don’t really expect it to go in. You expect us to get the rebound and have a possession to take the lead. But everything changed when it goes in. All-time great players make great shots, that’s what happens.”

Golden State hosts Memphis, which defeated San Antonio in Wednesday’s other play-in game, for the eighth seed on Friday. The winner of that game will face top-seeded Utah.

James and Davis were 3 of 19 from the field in the first half before getting back on track. They combined to go 14 of 22 in the second half.

“We were very lackadaisical in the first half. We were playing hesitant because of the situation. There is a next game, but there is no next game,” Davis said. “We had to remind ourselves to get going and play our style of basketball. We had to find our swagger knowing we were the defending champions.”

Los Angeles trailed by 13 at halftime and were down by 12 midway through the third quarter before rallying back. They didn’t get their first lead until Kyle Kuzma’s layup 56 seconds into the fourth quarter put them up 81-79.

The final 12 minutes saw three lead changes and five ties. The Warriors were up 98-95 on Curry’s bank shot before the Lakers scored seven of the game’s final nine points.

“This is a bitter pill to swallow. This was our game and we couldn’t get it done,” Golden State coach Steve Kerr said.

Golden State led 55-42 at halftime as Curry buried a 3-pointer at the buzzer. The Lakers opened the second half by going on a 14-2 run that included seven points by Schröder.

Schröder’s 3-pointer drew Los Angeles within a point at 57-56, but he fouled Curry when he attempted a shot beyond the arc.

Curry made all three of his shots to start a 15-4 spurt by the Warriors. Curry’s fourth 3-pointer of the night pushed Golden State’s advantage to 72-60 before the Lakers regained control and ended the quarter with a 17-7 rally.

“We began to play defense and then being able to score in transition after getting stops,” Davis said.

Golden State had only five turnovers in the first half, but had eight in the third quarter that resulted in 12 Lakers points.

“We got away from ourselves. Our turnovers weren’t forced. We made careless decisions with the ball,” Kerr said.

Curry came in averaging 11.8 points in the first quarter this month, but scored just five in the opening 12 minutes. Curry didn’t take his first shot until nearly four minutes into the game when he failed to connect on a driving layup and didn’t make his first field goal until a layup with 4:59 remaining.

Warriors: Kevon Looney already had his 10th rebound with 8:22 remaining in the second quarter. He finished with six points and 13 boards.

Lakers: It is Los Angeles’ 13th double-digit comeback of the season. … Caruso kept Los Angeles in it in the first half with 12 points. He made all five of his shots from the field, including a pair of 3-pointers.

Phoenix took two of the three regular-season meetings against Los Angeles, but the Lakers did post a 123-110 victory in the most recent meeting on May 9.

James said he is looking forward to his first playoff matchup against Suns guard and close friend Chris Paul.

“It was good to get that first playoff punch out of the way. It wasn’t comfortable, but it settled us,” James said. “We are looking forward to what is in store.”

The Warriors will host the Grizzlies for the second time in six days on Friday. Golden State won two of the three meetings, including 113-101 at home last Sunday to wrap up the eighth seed.

“We’ll have Thursday to prepare for Memphis,” Kerr said. “Everyone is disappointed, but we will be ready to go.”