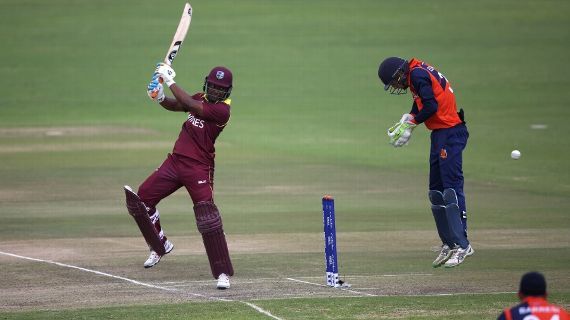 A brutal 84 from Evin Lewis powered West Indies to 309 for 6, and put Netherlands out of contention for the Super Sixes, in a rain-hit clash in Harare.

Chasing a revised target of 222, Netherlands were cruising at one stage, when Wesley Barresi (64) and Ryan ten Doeschate (67*) were in the midst of a 113-run stand for the third wicket at a run-rate of 6.78, but a string of run outs put them on the back foot.

First, Barresi was run out in the 24th over – courtesy Lewis’ brilliance in the deep – and in the next over captain Peter Borren was caught short while trying to steal a second run off a free-hit. Ten Doeschate, the No. 3 batsman, was at the other end on both occasions. The rapidly rising asking rate applied pressure on Roelef van der Merwe and Pieter Seelaar, who both fell for single-digit scores.

Earlier, after being sent in, West Indies started with a bang with Chris Gayle and Lewis adding 85 off 51 balls for the opening stand. Gayle was particularly severe on seamer Vivian Kingma, taking him for 38 runs off 22 balls, including five sixes.

Lewis, at the other end, got stuck into Timm van der Gugten, smashing him four successive boundaries in the fourth over. The rollicking stand ended when van der Merwe pulled off a stunning catch to remove Gayle for 46 off 31 balls. Van der Merwe then slowed West Indies down with the ball, dismissing Shimron Hetmyer and Shai Hope. However, it was Borren who had taken the big wicket of Lewis in the 28th over. By then, he had hit six fours and four sixes.

Netherlands then lost opener Scott Edwards for 1, but Barresi and ten Doeschate gave the innings direction and ensured they stayed in touch with the asking rate. The run outs that followed then derailed the chase and when the game was called off in the 29th over, Netherlands were 54 runs short of the D/L score, this ensuring UAE’s progress to the Super Sixes.

Regional Delegates Consider the Future of Social Security in the ECCU