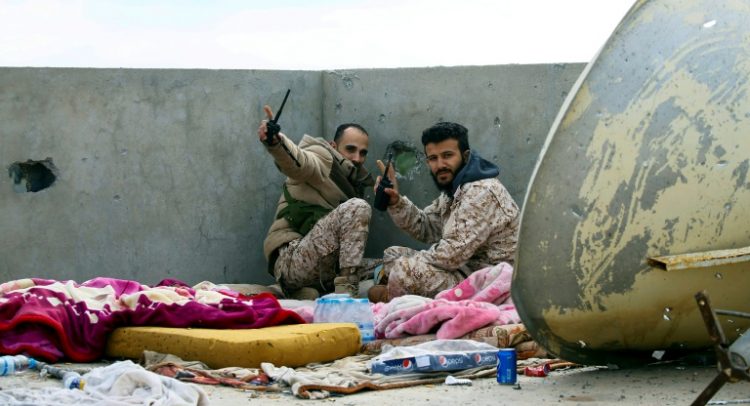 Libyan strongman Khalifa Haftar left Moscow on Tuesday without signing a permanent truce aimed at ending nine months of fighting, though Russia claimed he agreed to maintain the fragile ceasefire.

The commander’s abrupt departure early Tuesday was a setback for an international diplomatic push in recent days, though Moscow insisted it would continue mediation efforts.

Russia’s defence ministry, which attended Monday’s talks, said Haftar had asked for two days to consider the deal and a shaky ceasefire established at the weekend would continue.

Haftar and his allies were in Moscow on Monday for talks with the United Nations-recognised government headed by Fayez al-Sarraj that is based in Tripoli.

Sarraj’s government has been under attack since April from forces loyal to Haftar, who is based in the east of the oil-rich North African country with his own loyalist politicians.

The two sides had agreed to the ceasefire that took effect at the weekend and were in Moscow to sign a long-term agreement.

Haftar departed without inking the document but the talks achieved “an agreement in principle… to maintain the ongoing ceasefire,” the defence ministry said.

The talks raised hopes of an end to the latest fighting to wrack Libya since a 2011 NATO-backed uprising killed dictator Moamer Kadhafi.

But after seven hours of negotiations, only Sarraj signed the agreement, and the two sides apparently never met face-to-face.

A Facebook page for Haftar supporters said Tuesday that they are “ready and determined to achieve victory.”

“We will pursue our efforts in this direction. For now, a definitive result has not been achieved,” Russian Foreign Minister Sergei Lavrov said.

Russia’s military however said that Haftar “asked to take two days to discuss the document with tribes supporting the (Libyan National Army),” which he commands.

Russia’s RIA Novosti news agency quoted a source in Haftar’s stronghold Benghazi as saying he did not sign because the agreement had no timetable for disbanding groups allied with Sarraj’s Government of National Accord (GNA).

Erdogan reacted angrily, saying “We will not hesitate to teach the putschist Haftar a deserved lesson … if he continues his attacks on Libya’s legitimate administration and our brothers in Libya”.

Erdogan said the issue would be discussed at talks in Berlin on Sunday to be attended by European, North African and Middle Eastern countries as well as the the UN, the EU, the African Union and the Arab League.

“The putschist Haftar did not sign the ceasefire. He first said yes, but later unfortunately he left Moscow, he fled Moscow,” Erdogan said, while praising “positive” talks.

Western powers are keen to stabilise Libya — home to Africa’s largest proven crude reserves — following years of turbulence since the 2011 killing of Kadhafi.

Since the start of the offensive against Tripoli, more than 280 civilians and about 2,000 fighters have been killed and 146,000 Libyans displaced, according to the United Nations.

The clashes have also spurred a growing exodus of migrants from Libya, though nearly 1,000 intercepted at sea have been forced to return this year, according to the UN.

Putin and Erdogan made a joint call for a ceasefire, which started early Sunday and was welcomed by the UN.

Putin later Monday discussed the talks with German Chancellor Angela Merkel, who aims to hold a UN-sponsored peace summit on Libya this month.

Turkey and Russia’s diplomatic initiative came despite the countries being seen as supporting opposing sides.

Ankara dispatched troops — in a training capacity, it said — to support the GNA in January in a move criticised by European powers and US President Donald Trump.

The GNA has signed agreements with Ankara assigning Turkey rights over a vast area of the gas-rich eastern Mediterranean, in a deal denounced by France, Greece, Egypt and Cyprus.

Russia has been accused of backing pro-Haftar forces, which are also supported by the United Arab Emirates, Saudi Arabia and Egypt — all regional rivals of Turkey.

Several hundred Russian mercenaries are reportedly in Libya, but Putin stressed they are not in Moscow’s pay.