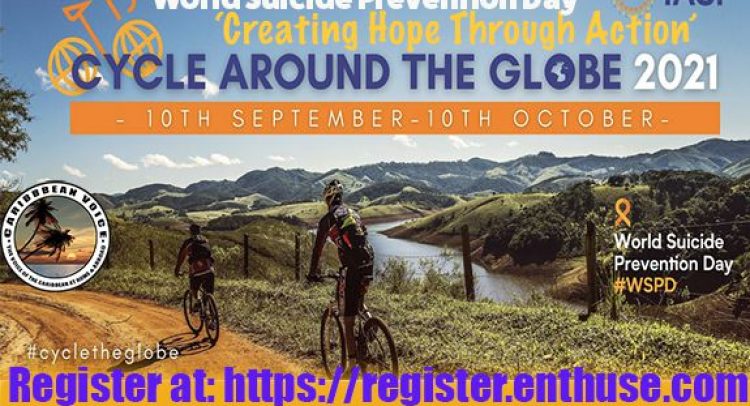 ‘Light A Candle’ and ‘Cycle The Globe’ during Suicide Prevention Month

New York, 7th September, 2021: World Suicide Prevention Month is once again here and, as usual, The Caribbean Voice (TCV) joins with the International Society for Suicide Prevention (IASP) to encourage participation in its two global activities: ‘Light a Candle’ and ‘Cycle the Globe’ (see attached poster).

‘Light a Candle’ is an initiative which encourage persons globally to light a candle (or diya) near a window on September 10 at 8PM. TCV echoes this call and is urging people everywhere to join in this effort to remember those who died by suicide and to honor those who survived. ‘Cycle the Globe’ urges individuals to register at https://register.enthuse.com/ps/event/cyclearoundtheglobe2021 and between September 10 and October 10 ride a cycle (mobile or stationary) as often as possible, then total and enter the distance on the same website. During the cycling persons can wear the suicide prevention ribbon, which is usually orange and/or carry a placard with the theme for this year’s Suicide Prevention Month, ‘Creating Hope Through Action’. All distances will be totalled and publicized; last year that amounted to twice around the globe.

TCV kicked off Suicide Prevention Month (September) with the launch of a suicide prevention campaign at Cane Grove, Guyana (August 30-Sept 2) in collaboration with the Ministry of Health and GOINVEST (government one stop shop investment agency), at which individuals were trained as suicide prevention gatekeepers. These gatekeepers will become the eyes and ears of the community seeking to identify suicide ideation and take proactive action.

The campaign will continue with the trainees distributing 3,000 info leaflets to households to sensitize them about suicide prevention. They will also put up a number of full color, glossy posters (see attached poster) at high traffic areas, featuring a message by TCV spokespersons, singing stars Terry Gajarj and Roger Hinds and contact info to seek help. This campaign will be taken to other parts of Guyana and other Caribbean nations over the next three years.

On World Suicide Prevention Day, September 10, TCV will hold a two hour virtual panel discussion on ‘Prevention Suicide’ (6-8PM, New York City time), with panelists drawn from across the Caribbean and Diaspora. During the panel discussion all participants will light a candle or diya to reflect the the ‘Light a Candle’ initiative. The panel discussion will be live on TCV’s FB page at https://www.facebook.com/groups/suicideepidemic/. A similar panel discussion to be held in Barbados on the same day, will include representatives of TCV on the panel. Meanwhile, TCV is urging individuals to take photos or videos as they light their candles and post on its FB page or email to caribvoice@aol.com, along with names and address. All photos and videos will be also posted as a collage on TCV’s website caribvoice@aol.com.

During the month TCV Team Barbados will also launch a Train the Trainer Suicide Prevention Gatekeepers’ program in Barbados in collaboration with the Barbados Youth Advance Corp and other stakeholders.

Among Caribbean nations Guyana suicide is still a huge issue in Guyana with the latest WHO figures indicating the second highest suicide rate, while Suriname is at number 8. On the flip side Antigua & Barbuda, Barbados, Grenada, St. Vincent & the Grenadines, and Honduras are among the top ten nations with lowest suicide rate.The Coronavirus pandemic has created a mental health crisis with suicide among mental health issues that have been directly impacted, rising significantly globally, after initially decreasing because of the lockdown. What is very revealing is while that rate for females is 17.4, for males it is 63, a huge disparity while globally, suicide ranks among the three leading causes of death among those aged 15–44 years. Attempted suicides are up to 20 times more frequent than completed ones while globally it is estimated that 25% or more suicides go unreported. As well, currently one out of every 100 deaths occur by suicide, and the World Health Organization aims to reduce the rate of suicide to a third by 2030.

For information and participation in these various observances, events and activities email caribvoice@aol.com, what’s app 646-461-0574.

Report: 150 starved to death in Ethiopia’s Tigray in August