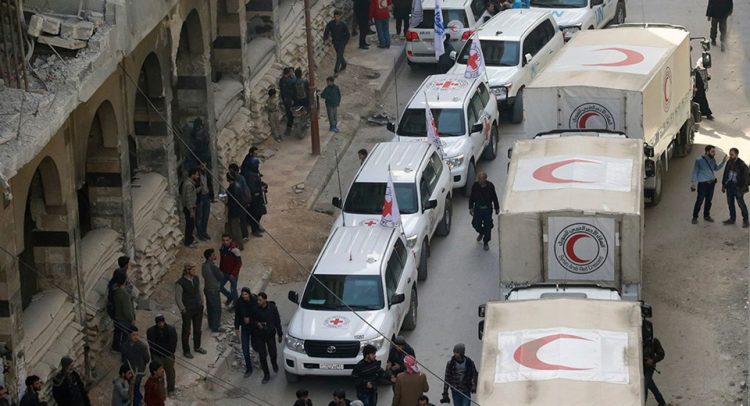 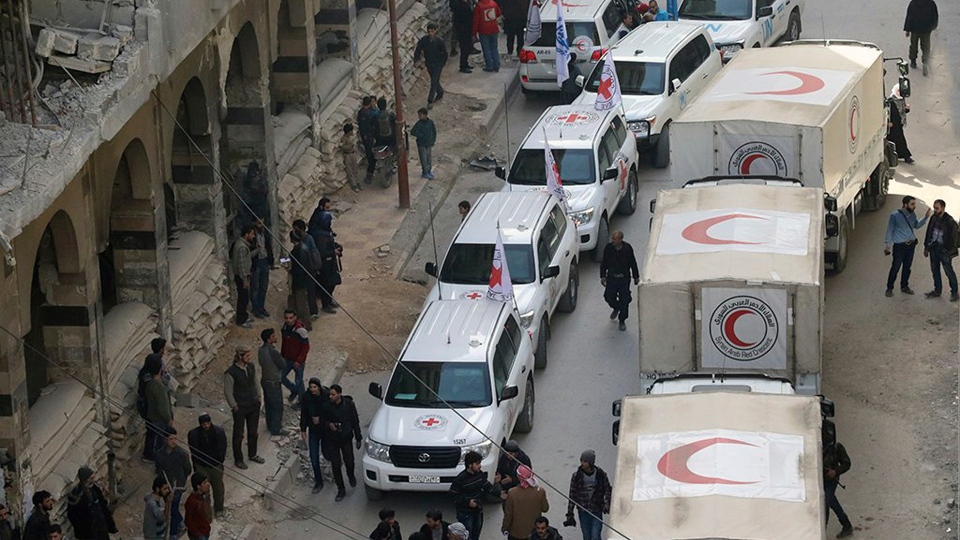 Some 25 trucks of food aid have entered the town of Douma in Syria’s besieged Eastern Ghouta, according to the International Committee of the Red Cross (ICRC).

The convoy, facilitated by the ICRC as well as the United Nations and the Syrian Red Crescent crossed into Douma on Thursday through the al-Wafideen crossing.

The ICRC said they were delivering food including 5,220 food parcels and 5,220 flour bags, enough for 26,100 people, with each parcel of food meant to last a family of five for a month.

Abdelmalik Aboud, an activist in Douma, told Al Jazeera that the amount of food aid is not enough, because it is being distributed to all families in the enclave east of the capital, Damascus.

“The aid is being divided between all of the people in Ghouta – no one is being left out. So one parcel from the United Nations is being given to around 40 people. This will not be enough to last each family for more than two days,” Aboud said.

Iolanda Jaquemet, a spokesperson for the ICRC in Geneva, Switzerland said the aid teams are very aware that the food is limited.

“The needs are much larger than what we’re providing and we know that. Our convoys can only cover a small amount of the need,” she told Al Jazeera, adding that the concept of each parcel lasting a family of five for a month would be in an ideal situation.

“We have to negotiate with all the parties involved in fighting in that area – we take the amount we’re allowed to take,” she added.

The president of the ICRC, Peter Maurer, and the regional director, Robert Mardini, entered the enclave as part of the convoy to assess the situation on the ground.

The ICRC also released a video showing the entrance of the convoy into Eastern Ghouta.

The area is one of the last major remaining strongholds under the armed opposition, who are aiming to topple the government of President Bashar al-Assad.

The enclave is the current major battleground in Syria’s war, which entered its eighth year on Thursday.

It has been under increased international spotlight in recent weeks due to civilian suffering during an intensified campaign launched by Syrian government forces and its principal military ally  Russia,to retake control of the area.

Since the start of the campaign on February 18, at least 1,249 civilians have been killed in daily aerial and ground bombardment, according to the Syrian Observatory for Human Rights, a UK-based monitoring group. The figure includes 252 children and 171 women. At least 4,600 others have been wounded.

Eastern Ghouta’s proximity to Damascus, the seat of President Assad’s government – renders it a key target for the government.

Assad’s government says it is fighting “terrorists” there. While there is a presence of Hay’et Tahrir al-Sham, a group formerly linked to al-Qaeda, Eastern Ghouta is mainly under the control of armed opposition groups affiliated with the Free Syrian Army (FSA) such as Faylaq al-Rahman and Jaish al-Islam.

The FSA is a loose conglomeration of armed brigades made up of Syrian army defectors and ordinary civilians, which receive financial and logistical support from the US, Turkey, and several Gulf countries.

Syrian government forces say they have captured more than half of Eastern Ghouta and have split the area into three sections. Their offensive has cut off the towns of Douma and Harasta from each other and from other towns in the south.

Aboud, the activist in Douma, said there was a pause in the shelling due to the UN delegation.

The UN has said that at least 1,000 sick and wounded residents of Eastern Ghouta are in need of life-saving medical attention. On Wednesday, at least 150 civilians requiring urgent medical treatment were evacuated from the enclave.