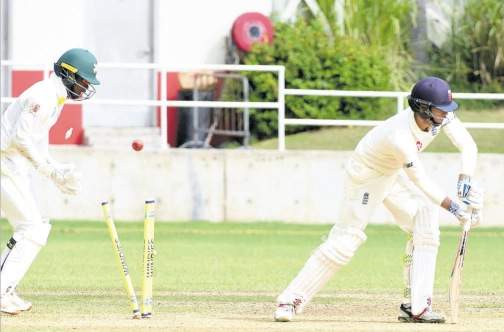 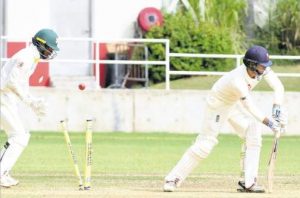 England Lions Captain Keaton Jennings led the way with a solid, unbeaten hundred as the tourists seized control on the opening day of the three-day warm-up match against a Jamaica Select XI at Sabina Park.

At the close of play yesterday, the Jamaica team, jolted by the English seamers, were 36-4 in reply to 263-8 declared.

Jennings, who has played six Test matches for England, was hardly expansive in his stroke play on a very dry batting strip. The left-hand opener accumulated 129 runs in an innings that spanned 207 deliveries and contained 13 fours and a pair of sixes.

Useful contribution also came from Alex Davies, who struck an 80-ball 53. The 97-run stand between the two for the seventh wicket formed the backbone of the Lions’ total.

Earlier, the Jamaica XI won the toss and asked the visitors to take first strike.

And they managed to prise the wickets of Haseeb Hameed and Nick Gubbins as the Lions reached lunch at 75-2.

Opener Hameed was first to go for 18 when pacer Gordon Bryan set him up with a number of away cutters before darting in a yorker that crashed into middle stump.

Left hander Gubbins (five) was out leg before wicket to off-spinner Merchant.

After the break, Leveridge pushed back the Englishmen with some impressive out-swing bowling.

The 27-year-old pacer had Liam Livingstone (11) nudging an away swinger to second slip where Garth Garvey took a sharp catch at 91-3. And with four added to the total he supplied another away swinger that Dan Lawrence (two) edged to wicketkeeper Aldaine Thomas.

Left-arm finger spinner Stephan Casey had Joe Clarke (11) lbw, while leg-spinner Jacobs outfoxed Ben Foakes with a quick, straight delivery that sneaked through the gate between bat and pad to disturb the stumps.

All the while at the other end the 25-year-old Jennings remained unfazed, playing tight and compact against spin and pace. He ticked the score over with singles and twos and every so often stepped up the pace with some attacking shots. A nudge behind square on the leg side got him two runs to complete his century.

Davies was more aggressive in his knock, while hitting eight boundaries before he was trapped lbw to the wily Jacobs.

The England Lions’ seamers appeared right at home from the outset as the Jamaica XI top-order folded meekly. Left-hand opener Trevon Griffith, who was dropped at second slip off Porter in the opening over, left alone a swinging delivery from the same bowler and was bowled for one.

The very next ball Garvey (zero) tried to leave alone a ball from Porter that hit the pad. He seemed surprised he was given out lbw.

Left-hander Assad Fudadin (one) went softly when he chased a short and very wide delivery from the long-limbed Roland-Jones and succeeded in making contact with the toe of the bat for wicketkeeper Foakes to take the catch.

Kenar Lewis made 22 before he was dismissed off the last ball of the day, attempting a leg glance that was judged to have hit bat or glove on its way through to the wicketkeeper.

The batsman appeared unhappy with the decision, though earlier he was fortunate that Roland-Jones was called for overstepping when he edged a ball to the diving Foakes.