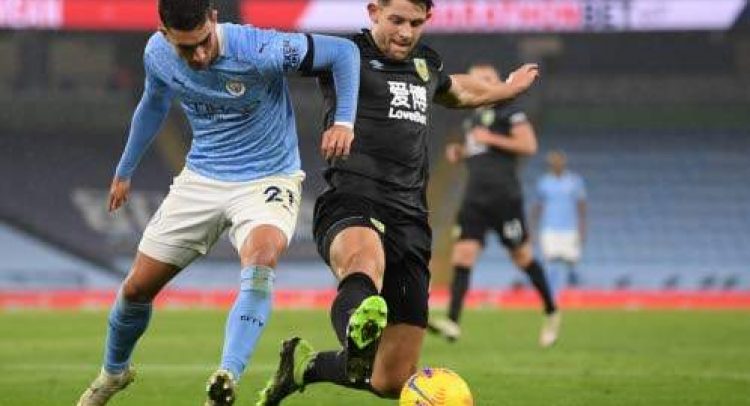 LONDON, United Kingdom (AFP) — Jurgen Klopp again fumed at a “dangerous” schedule as Liverpool had two goals disallowed and conceded two penalties in a 1-1 draw at Brighton, while Man City clicked back into gear with a 5-0 thrashing of Burnley yesterday.

Liverpool edged back to the top of the Premier League table, a point ahead of Tottenham, but were left frustrated by Pascal Gross’s stoppage-time penalty which salvaged a point for Brighton.

Klopp had voiced his displeasure all week at facing a lunchtime kick-off just three days after a Champions League defeat to Atalanta.

Already hit by a huge list of injuries, the Reds suffered another setback when James Milner had to be replaced with a hamstring problem in the second half.

Klopp named Neco Williams and Nathaniel Phillips in a makeshift back four and Brighton took advantage when Williams wiped out Aaron Connolly for Brighton’s first spot kick, but Neal Maupay sent it wide.

Mohamed Salah was then denied an opener by video assistant referee (VAR) for offside but the Egyptian teed up Diogo Jota to keep his flying start to life at Liverpool going with a fine finish on the hour mark.

Sadio Mane had a second for the visitors ruled out for offside before another VAR review went against Liverpool when Andy Robertson was adjudged to have kicked Danny Welbeck trying to clear.

This time Gross took responsibility from the spot and sent Alisson Becker the wrong way.

City shrugged off their problems in front of goal by hitting five past Burnley for the fourth consecutive clash between the two at the Etihad.

Benjamin Mendy made it 3-0 before half-time and Ferran Torres got his first Premier League goal before Mahrez completed the scoring and his hat-trick.

Victory propelled City to within six points of Liverpool at the top of the table with a game in hand still to come.

“It’s important for us to score goals and keep going,” said Guardiola, who will hope a favourable run of fixtures over the next month can haul his side back into the title race.

Sergio Aguero was not involved for City, but Guardiola confirmed that was due to a small injury problem rather than his close family connection to Diego Maradona, who died aged 60 on Wednesday.

Aguero was previously married to and had a child with Maradona’s daughter Giannina.

Everton boss Carlo Ancelotti was reduced to tears before his side’s 1-0 loss to Leeds as respects were paid to Maradona before all Premier League games this weekend with a minute’s applause.

An enthralling 90 minutes followed at Goodison Park with chances aplenty for both sides despite just one goal, scored by Raphinha 11 minutes from time.

James Rodriguez and Richarlison had goals ruled out for offside before the break, while Dominic Calvert-Lewin dragged a big chance wide for Everton early in the second half.

But it was Leeds who had the majority of the chances as Jordan Pickford made a brilliant save to deny Patrick Bamford, while Raphinha and Jack Harrison failed to hit the target with clear openings.

Raphinha finally made the breakthrough when he arrowed a low left-footed shot beyond Pickford from 25 yards to move Marcelo Bielsa’s men up to 11th.