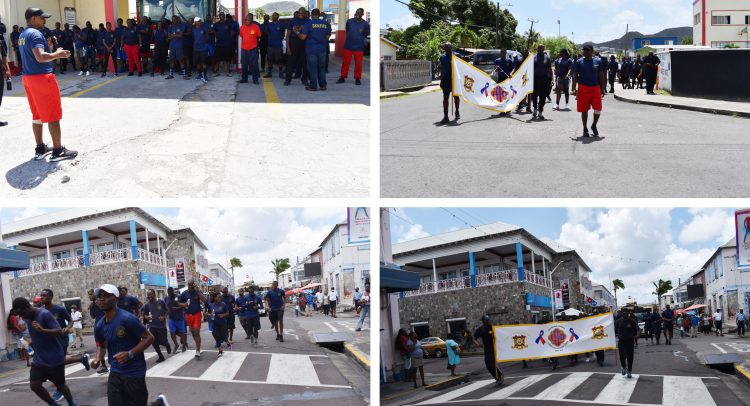 BASSETERRE, ST. KITTS, May 7, 2021 (MMS-SKN) — Officers of the St. Kitts and Nevis Fire and Rescue Services joined their counterpart from around the world in the celebration of International Firefighters’ Day on Tuesday May 4 by taking part in a ‘Run through Town’ exercise, and conducting a mini fire drill in downtown Basseterre.

“Today is International Firefighters’ Day, and as part of the commemoration for the International Firefighters’ Day, the St. Kitts and Nevis Fire and Rescue Services would have participated in what we call ‘Run through Town’,” said Acting Chief Fire Officer, Mr Garfield Hodge, on Tuesday May 4. “The aim was to bring about the awareness of the significance of the day and also to exhibit our skills, as we would have conducted what I would term a ‘mini fire drill’ on Fort Street.”

Officers from both the St. Kitts Division and the Nevis Division had assembled at the Basseterre Fire Station where they were addressed by Mr Hodge before they set of for the ‘Run through Town’ which took them through Sundown Road, Bay Road, Fort Street, Cayon Street, Church Street, Liverpool Row, and back to Fort Street.

They converged at the junction of Fort and Central Streets where according to the Chief Fire Officer, “we would have converged and conducted a mini fire drill, exhibiting our skills as firefighters, and showing the public what we do on an ongoing basis, when we would have turned out to a fire scene.”

Later on that day (Tuesday, May 4), the Acting Chief Fire Officer delivered a national address on ZIZ Radio and Television in commemoration of International Firefighters’ Day.

International Firefighters’ Day (IFFD) which is celebrated on May 4 is observed to honour the work and sacrifice made by firefighting experts. It was instituted after a proposal was emailed out across the world on January 4, 1999 following the deaths of five firefighters in tragic circumstances in a bushfire in Australia that had taken place on December 2, 1998.

In addition to the run and the fire drill, the St. Kitts and Nevis Fire and Rescue Services officers also held a sale of T-shirts on Fort Street, as a means of raising funds to assist their counterparts in St. Vincent and the Grenadines, a country in the OECS which has been ravaged by the eruption of a volcano.

“Superintendent James who is charge of the St. Vincent and the Grenadines Fire Department reached out to me in a desperate fashion appealing for assistance for drinking water,” observed Mr Hodge. “Our officers would have put together a package of 100 cases of water, and those cases of water are on the way to St. Vincent and the Grenadines as we speak.”

COVID-19 may lead to blood clots, rather than vaccines causing problem