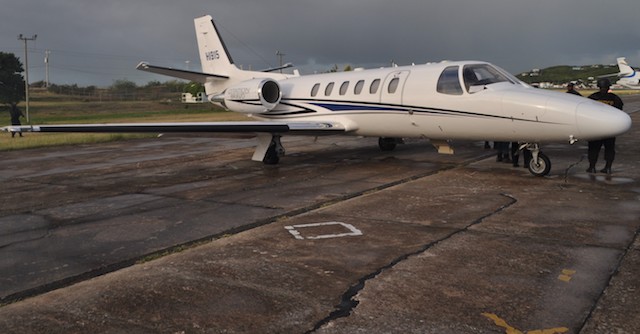 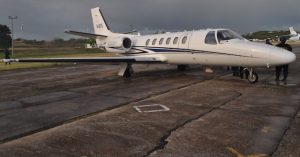 Four drug-related charges have been filed against the local pilot who was caught on a private jet as it was about to leave Antigua’s V.C. Bird International Airport on Friday carrying 105 pounds of cocaine.

Colin Murraine, a chief pilot with Caribbean Helicopters Limited (CHL), is to appear in court today accused of possession, exportation of cocaine, being concerned with the supply of cocaine and drug trafficking.

The latter charge carries a maximum penalty of life in prison.

The 31-year-old Paynters resident was among four people who the Office of National Drug and Money Laundering Control Policy (ONDCP) arrested on Friday at Runway 10.

The law enforcement agency said that the other three people, including two foreign pilots, have been released from custody.

In a media statement yesterday, the ONDCP said investigations are continuing and as part of that process, the aircraft remains in the agency’s possession.

The ONDCP also has control over the cocaine that was found packed in two large suitcases.

The agency said that the estimated wholesale street value for the 47.51 kilograms or approximately 105 pounds of cocaine is $1.7 million.

Since the investigation began, Murraine’s home was searched on Saturday, and several other residents were detained for questioning and released that same day.

Why India have become so hard to beat in ODIs

Children with 'normal' heads may have Zika brain damage — study