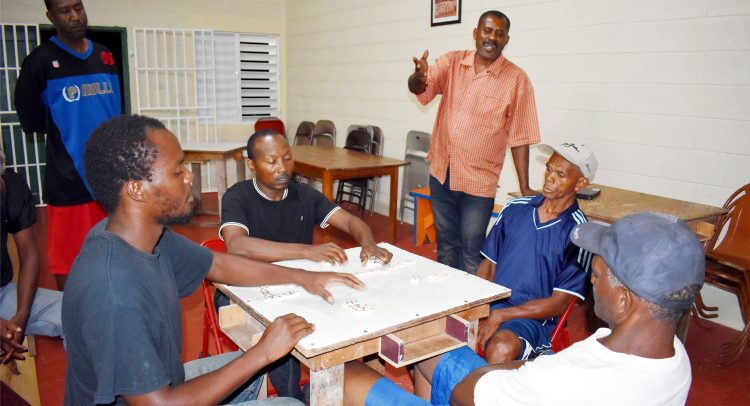 BASSETERRE, ST. KITTS, August 16, 2018 (PLP PR Media Inc.)  — When games in the eighth segment of the first round of the round-robin stage in the 23rd edition of the annual Constituency Number Seven Dr the Hon Timothy Harris Domino League competition were played on Tuesday August 14, champions Lodge and immediate past champions Unity returned comfortable home wins.

While the two teams previously shared the Lodge Community Centre in Lodge Project as they home ground, there was a notable change in this year’s edition of the longest running domino league in the region when former champions Unity acquired a new home. Their new home, Cuban Bar, also in Lodge Project is actually next to the Lodge Community Centre.

Defending champions Lodge were at home to the visiting Guinness whose home base is across the ridge at Bernette Bar in Hidden Alley, Lodge Village. At the end of a hotly contested game, Lodge beat Guinness 13-11. At Cuban Bar, Unity handed Small Corner Bar Domino Club a 13-8 beating.

An unfortunate development is that Tabernacle Domino Club has withdrawn from the league after a number of their players were poached by other teams. The last game they played was on Thursday August 2, when they were
beaten 7-13 by Beers. According to the league organiser, Calvin Farrell, in the future games whatever team that is supposed to face Tabernacle will collect an automatic six points.

In other games played on Tuesday August 14, Unstoppable recovered from two straight loses in the previous segments to beat Christchurch 13-7 at the Edgar Gilbert Pavilion in Molineux. However, Saddlers bagged a 13-0 walk-over win over newcomers Phillips who forfeited the game after they arrived late at the venue, Kittie Bar in Saddlers.

Buoyed by a win in the previous segment played on Thursday August 9 against Unstoppable, Sylvers capitalised on home ground advantage at Tacky Bar in Hidden Alley Lodge Village to beat Molineux 13-11. Beers stopped Giants in their tracks with a 13-6 beating at the Lodge Community Centre. Parsons from Constituency Number Six were supposed to have travelled to Tabernacle but instead collected six points as home team Tabernacle has withdrawn.

Two games will be played at the Lodge Community Centre, where Giants will meet Unity and Lodge will be at home to Beers. Other games will be Phillips vs. Unstoppable at Mansion, Molineux vs. Christchurch in Mansion, Sylvers vs. Saddlers at Tacky Bar, Guinness vs. Parsons at Bernette Bar, and Tabernacle vs. Small Corner Bar in Tabernacle.

Turkey 'ready to talk about everything' with US to solve disputes