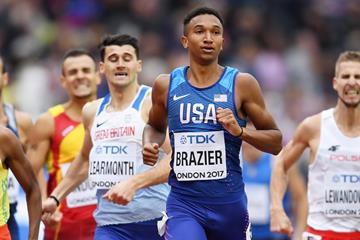 LONDON DISAPPOINTMENT BEHIND HIM, BRAZIER LOOKING TOWARDS BIRMINGHAM 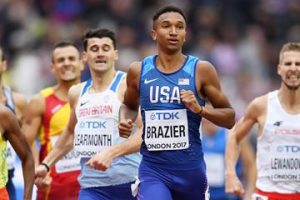 The rush, the roar, the race – Donavan Brazier takes a moment to reflect on some of the biggest moments of his fledgling career, and even when we chatted, deep in the off-season, there’s no disguising the excitement on the 20-year-old’s face.

He thinks back to the first time he represented his country, at the Penn Relays in Philadelphia earlier this year, and how it felt to wear the USA kit again at the IAAF World Championships in London.

“When I put it on and saw myself in the mirror, I felt like I got stronger,” he says. “To run on the track and hear people cheering for your country, you feel you’re representing something greater than yourself. I keep on trying to get that feeling.”

It’s a rush, an addictive one, and Brazier may not have long to wait before getting his next hit.

The IAAF World Indoor Championships Birmingham 2018 are now less than five weeks away, and Brazier has been back training since the start of October with a view to making as big an impression this indoor season as he did in 2016.

Back then, the teenager sent shockwaves around the world of 800m running when soloing his way to a North American U20 indoor record of 1:45.93 in College Station, Texas. A couple of months later, he watched on TV as Boris Berian front-ran his way to gold in the world indoor 800m final in 1:45.83 and couldn’t help wonder how he might have fared.

“I’m not saying I would have beaten him, but I was thinking if I was in Boris’s race I could have pushed him and we both could have run faster,” he says. “I want to run indoors this year. I’m not going to force it if I’m not ready, but I think I’ll be ready.”

To secure his place in Birmingham, however, he will have to get things right at the US Indoor Championships in Albuquerque in February, and in a race as unpredictable as the 800m that’s never a given.

Brazier learned that the hard way on his global championship debut in London earlier this year. Having gone in as US champion, many expected him to make the final, but a lack of experience – or perhaps confidence – cost him dearly in the semi-final and he was eliminated after finishing seventh in 1:46.27.

Brazier had front-run his heat to win in 1:45.65 – a tactic he has used to good effect in recent years – but in the semi-final he changed his approach and hung back, something he still regrets today.

“I comfortably ran 1:45 in the heat, but then I went to fix what wasn’t broken in the next race and got in a really crappy position,” he says. “Not everybody’s David Rudisha, but you control the race when you’re at the front. When it comes to American races I like to get out front, but for some reason when I race overseas I’ve shied away from it.”

Bowing out in the manner he did left a bitter taste.

“It’s sickening,” he says. “What happened in London was disappointing, but when you get that feeling you never want to feel it again.”

The wide-open nature of the final, and the shock victory of France’s Pierre-Ambroise Bosse, only compounded Brazier’s feelings of what-if.

“That dude put in work, and I was happy for him, but I was really disappointed in myself,” he says. “When I watched it, I was like, ‘that could have been me’, even though a lot of guys were probably saying that.”

Time, however, remains very much on Brazier’s side.

Ever since he announced himself to the world last summer by winning the NCAA 800m final in 1:43.55, a North American U20 record, Brazier has seemed destined for success at the very top tier. He turned professional in the weeks after that race, though not finishing college was never an option.

“I always wanted to get my degree, and my mom said the same: ‘you’ve got to get your degree,’” says Brazier, who is entering his third year in recreation parks and tourism science at Texas A&M. He is coached there by Alleyne Francique, the former 400m international from Grenada, and their approach to training is always quality over quantity.

“The farthest I’ve ever run was 7.6 miles,” says Brazier, as if still haunted by the experience. “I’ll do five or six miles usually for my long runs, but they’re fast: I’ll do five miles in half an hour.”

And while life as a professional track and field athlete may seem glamorous, the reality of his routine is a lot more mundane. “Wake up, go to class, train, go home and do it again,” says Brazier. “I’m really a boring person. I’ve a tonne of spare time but I don’t go out. I’m not social at all and I don’t party.”

Having grown up in Grand Rapids, Michigan, Brazier has an affinity for the outdoors and lists hunting and fishing as two of his favourite activities, though both are curtailed while living as a full-time athlete in Texas.

Looking ahead to 2018, his first goal will be to improve his PBs both indoors and out – both date back to 2016 – and then make sure to run his own race next time he lines up against the world’s best.

“In the 800 everyone wants to be in that second position but not everyone can, so I just can’t be scared to take that first position,” he says.

“I’m on a good route. My senior year of high school I was national champion, my freshman year of college I was NCAA champion, and my first year as a pro I was USA champion. I’m getting better every year.”