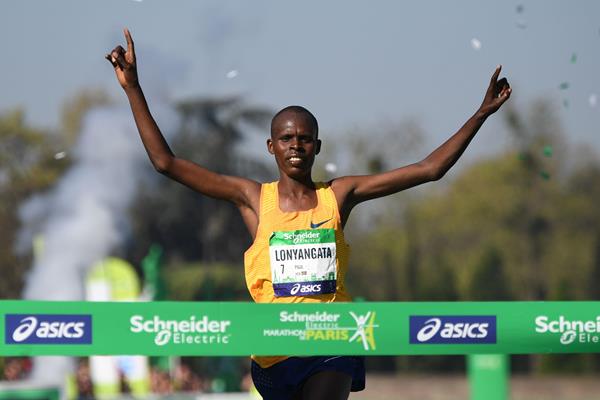 Paul Lonyangata of Kenya will be looking to retain his title at the Paris Marathon, an IAAF Silver Label road race whose 42nd edition takes place on Sunday (8).

The Kenyan could become the first man to win back-to-back titles since Steve Brace of Great Britain in 1989 and 1990. Last year, he improved his personal best to 2:06:10.

In addition to this win, the 25 year-old also succeeded in Lisboa in 2013 and Shanghai in 2015. Lonyangata is familiar with Paris roads as he finished runner-up over the half marathon in a best of 1:00:40, also last year.

Although he will wear bib no. 1, Lonyangata, whose last outing was a fifth place showing at the Sao Paulo 15km in December, doesn’t seem to be the main favourite on paper in this year’s edition, as he holds the fifth fastest time of the field.

Ethiopian Yemane Adhane is the only athlete to arrive with a sub-2:05 lifetime best, having prevailed in Amsterdam in 2012 in 2:04:48. Since then, he took silver at the 2015 IAAF World Championships and won in Fukuoka two years ago clocking 2:08:48.

Although he is the fastest man of the field, Adhane, who will turn 33 on Sunday, hasn’t shown good form since that success in Fukuoka.

Some of Lonyangata’s compatriots will also be in contention for the victory. First among them is Eliud Kiptanui, who has a 2:05:21 PB set in Berlin in 2015 when he finished runner-up.

Mark Kiptoo has also shined over the distance when he succeeded in Frankfurt four years ago in 2:06:49. He bettered that mark by 49 seconds the next year clocking 2:06:00. Last year however he finished 10th in Paris in a more modest time of 2:10:45. Kiptoo’s half marathon 1:01:04 success two weeks ago in Azkoitia highlighted his current shape.

Limenih Getachew of Ethiopia, second in Paris in a best of 2:06:49 in 2014, could also figure in the battle for the victory.

Not to be discounted are Ethiopia’s Yitayal Atnafu and Kenya’s Micah Kogo. Both have already performed well in Paris with fourth place finishes. Atnafu’s was last year when he clocked a 2:07:21 personal best. For Kogo, it was 2016 when he clocked 2:08:03, his second fastest performance. Kogo, the 2008 10,000m Olympic bronze medallist, has the fastest half marathon PB of the field at 59:33.

It is noteworthy that Atnafu is the only runner to have contested a marathon in 2018, finishing second in Houston in 2:09:07.

Hassan Chahdi, the best French marathoner, won’t be running. French hopes will rest with Benjamin Choquert, who finished 40th in a new best of 1:02:46 at the World Half Marathon championships last month in Valencia.

GOBENA AND CHEPNGETICH THE MEN’S FAVOURITES

On the women’s side, the battle for the victory should, on paper, come down to a duel between Amane Gobena of Ethiopia and Ruth Chepngetich of Kenya. Gobena, second in the event three years ago, clocked a best of 2:21:51 in Tokyo in 2016. She also won in Mumbai in January.

Chepngetich’s PB is just 45 seconds shy of the Ethiopian’s. The 24-year-old Kenyan set this mark when she prevailed in Istanbul last year. She also has three successes over the half marathon distance and finished 13th in Valencia two weeks ago.

Following a second place in last year’s event in 2:26:14, Gulume Chala of Ethiopia will be aiming to defy expectations. The 23-year-old has the third fastest time of the women’s field with 2:23:12.

Desi Mokonin of Bahrain will also have a role to play. Eighth in Dubai in 2:24:05 two months ago, she improved her half marathon best to 1:08:10 in Valencia to finish seventh, 1:10 faster than Chepngetich.

The field will also include three others women who already ran a sub-2:25 time, with Abedech Afework (second in Amsterdam in 2016), Ashete Bekele (runner-up in Seoul last year) as well as Marta Lema (runner-up in Xiamen two years ago).

About 45,000 runners are expected to take part to this year’s edition.