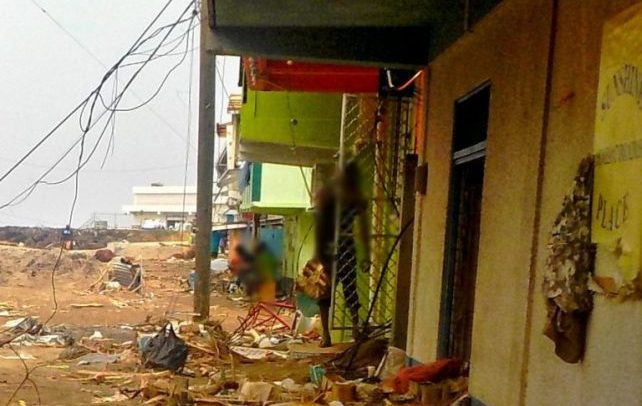 St Lucia’s former Prime Minister Stephenson King has suggested that the widespread looting and lawlessness, which took place in Dominica after Hurricane Maria, should be used as a yardstick on the way forward as his country prepares for the 2018 Hurricane Season.

King said curfews should be considered as part of the preparation in St. Lucia for the season which begins mere weeks away in June.

“I believe Saint Lucia must take note of what transpired in Dominica,” King, who is Minister for Infrastructure told a disaster response planning meeting Saturday in St. Lucia.

The former Prime Minister said he once believed that “Dominica was one of the more civil societies in the Caribbean” but was frightened at what took place in the wake of the devastating storm last September.

“I am very frightened at what I saw in Dominica – the disorder, and if you ask our policemen who served there, they will tell you of the disorder that went on, the disrespect, the violation of public property and private property – the destruction of assets,” he stated. “When we see the level of looting very early and even throughout – almost a total breakdown of law and order, we here in St Lucia must prepare ourselves for that.”

He suggested that when the country is in a shut-down mode ahead of an approaching storm, there should be ‘some kind of curfew’ until it is determined that it can be lifted to allow members of the public to venture out.

He added that unless curfews are in place and people understand that if they venture out they can be arrested, the environment will be created in which individuals can misbehave and engage in lawlessness.

King also suggested that there should be a clarification of the term “All Clear” after the passage of a storm.

“For me, ‘all’ means all – ‘clear’ means clear,” the former prime minister declared.

Looting in Dominica after the passage of Maria has been described as ‘the second hurricane’ by the Dominica Association of Industry and Commerce (DAIC). It said its members suffered $15-million in ‘secondary losses’ due to looting, landslides and flooding.

The Dominica Business Forum has called for an inquiry into the matter “to find out the failures in the security apparatus which allowed Dominicans to turn on the private sector with such brutality.”

However, the police have said they did their best in the circumstances following the storm.

“We saw a large number of persons, rather than coming together to maintain order… were engaged in rampant looting in the city,” Deputy Police Chief Davidson Valerie has said. “The police had made all necessary efforts. Many of those persons were arrested but yet areas, where the police were unable to reach, were taken advantage of, businesses were taken advantage of.”