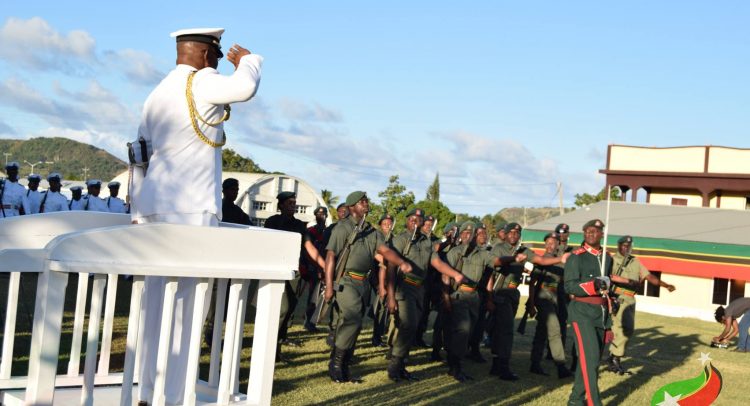 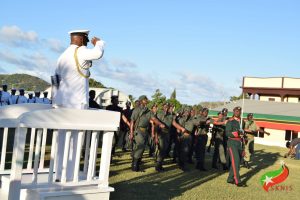 The near four decades of service in the Security Forces of St. Kitts and Nevis by the now retired Lieutenant Colonel and Commander of the St. Kitts-Nevis Defence Force (SKNDF), Patrick Wallace, was celebrated on Wednesday (February 28).

“I did not anticipate feeling the way I feel,” Lt. Col. Wallace said yesterday during a Retirement and Change of Command Ceremony that was held at Camp Springfield. With a note of sentiment, he expressed that he had had his last lunch at the base earlier that day and naturally it was the last of many activities for him as an outgoing soldier.

A few minutes earlier, Lt. Col. Wallace inspected a three platoon strong parade comprising units from the Regular (A) and Reserve (B) Companies as well as the Coast Guard Unit. Musical accompaniment was provided by the SKNDF Band. The outgoing commander looked over the troops and commended them for their turnout and the “excellent drills” performed on parade.

“I urge you to continue to strive to achieve the highest ethical and moral behaviour. Do not compromise your integrity. I urge you to treat all persons with dignity and respect regardless of race, religion, national origin, age or class,” he said.

Lt. Col. Wallace looked at the men and women on parade and reminded them to stay true to the values of the SKNDF. He identified them as loyalty, professionalism, duty, respect, and commitment.

“You are a fine group of young men and women. You will always be dear to me. I wish all of you the best, the very best and I thank all of you for your loyal service over the years, which has allowed me to fulfil my duty as force commander. I will forever be grateful,” Lt. Col. Wallace stated.

To his successor – Major J. Anthony Comrie, Commander Wallace expressed that he is confident that he will do a good job and live up to the rigorous demands of the job and the high standards that were set by the few who previously held the post. Appreciation was also expressed to the government for the support and trust placed in Wallace’s leadership.

“My government has relied on the Commander’s background, expertise and experience in matters of national security,” he expressed. “He has presented himself very well on every occasion over the last three years in which he frequented the Cabinet for discussion on issues of national security.

Dr. Harris wished Lt. Col. Wallace all the best in his retirement.

The outgoing SKNDF Commander was also presented with a plaque of appreciation from the SKNDF Regiment, a gift basket from the Administrative Staff at the Force Headquarters, a painting from the Ministry of National Security, and a medal from the Regional Security Service (RSS).

Read more stories like these and stay up-to-date with all of the government’s news, activities and programmes by visiting sknis.kn<http://sknis.kn/> and the official website of the  Government of St. Kitts and Nevis gov.kn<http://www.gov.kn>