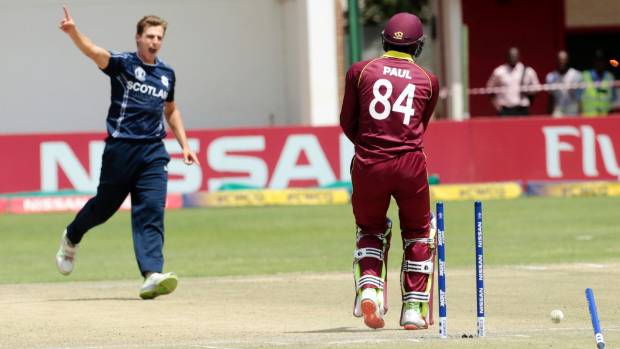 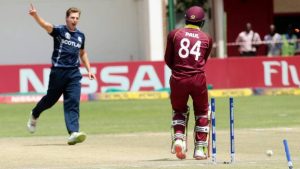 West Indies sneaked into next year’s World Cup in England as heavy rains coupled with a controversial umpiring decision helped them beat Scotland by five runs under Duckworth-Lewis-Stern (DLS) in their final Super Six match of the ICC World Cup Qualifiers here yesterday.

Faced with their second must-win match in three days, West Indies were bundled out for a paltry 198 in the penultimate over at Harare Sports Club, leaving themselves with a mountain to climb to secure one of the two World Cup places up for grabs.

Opener Evin Lewis top-scored with 66 and veteran stroke-maker Marlon Samuels struck 51, but the two-time former World champions collapsed from 123 for two in 31st over and lost their last eight wickets for 75 runs.

In reply, the Scots were reeling at 25 for three in the seventh over before recovering through the efforts of Richie Berrington who struck 33 and George Munsey, who gathered an unbeaten 32.

The game was still open when the rains arrived with Scotland on 125 for five in the 36th over, five runs adrift of the DLS par score of 130.

What was believed to be a passing shower, turned into a persistent heavy rain, forcing officials to abandon play an hour later, breaking Scotland’s hearts, but providing a flood of relief for the Windies.

“I’m extremely pleased to get through to the World Cup. We’ve been through a lot in the last two years,” captain Jason Holder said afterwards.

“We had to play to expectation. There was pressure in every game and the guys really put their hands up. I’m really pleased to get over the line, but my thoughts go out to Scotland for how they’ve played in this tournament.”

Sent in, West Indies had the worst possible start when talismanic opener Chris Gayle edged a peach of an away-swinger from Sharif to perish to a catch at the wicket off the very first ball of the encounter.

And the Caribbean side were in deeper trouble when Shai Hope wafted at a widish one from Sharif in the third over and also nicked a catch behind with two runs on the board.

However, Lewis and Samuels — both of whom starred with half-centuries against Zimbabwe three days ago — combined in a 121-run third-wicket partnership which stabilised the innings and laid the ideal platform for a later assault.

The left-handed Lewis faced 87 deliveries and struck seven fours and a pair of sixes, while Samuels counted four fours in a 98-ball stay at the crease.

Wheal’s return accounted for Lewis, lbw missing a heave to leg-side in the 31st over, and 19 balls later Samuels holed out in the deep attempting to clear long off with off-spinner Michael Leask (2-36) as West Indies slipped to 135 for four.

Without a run added, Shimron Hetmyer (four) edged an uncertain prod at Leask and was caught behind. Holder (12) tried to revive the innings in a 23-run fifth -wicket stand with Rovman Powell (15) but fell to a catch at short midwicket in the 40th over, tugging a short one from pacer Alasdair Evans.

Carlos Brathwaite struck a single six in scoring 24 from 26 balls, but was one of the last four wickets which went down meekly for 22 runs.

West Indies then hit back early when seamer Kemar Roach (2-20) had captain and key batsman Kyle Coetzer caught at point by Lewis for two with six on the board in the third over.

Holder claimed Matthew Cross playing on for four in the fourth over before Roach struck again, having Michael Jones caught by Powell at deep backward square for 14.

With Scotland tottering, Berrington came to his side’s rescue, adding a crucial 42 for the fourth wicket with Calum MacLeod (21) and a further 38 for the fifth wicket with Munsey.

But West Indies dried up the scoring before off-spinner Ashley Nurse (2-35) removed MacLeod to a fine low-return catch in the 22nd over.

Berrington counted four fours off 68 deliveries, while the left-handed Munsey, twice dropped behind off Nurse, notched five fours in a 52-ball knock.

With rain around, Nurse then earned a fortuitous lbw decision against the entrenched Berrington after the right-hander played back and missed one which would have clearly slid past leg stump.

The dismissal put DLS in the Windies favour and even though Scotland tried to up their scoring, the rains arrived before they could improve their maths.