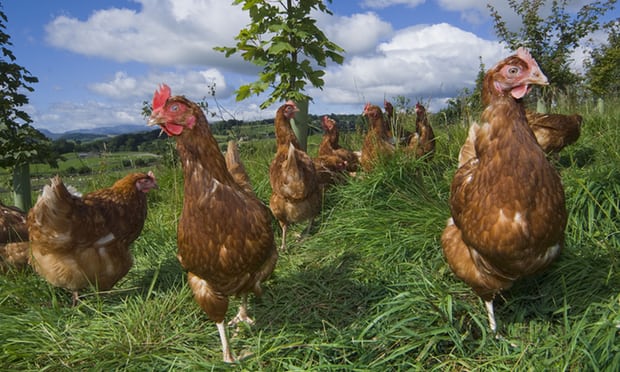 Luxury … chickens? Why businesses are flocking to fancy poultry There are luxury cars, luxury homes, luxury boats and luxury planes. And then there are luxury chickens. Some US small businesses are hoping the craze for fancy poultry will lay them a golden egg.

“Probably our top seller is the Easter Egger, which gives you the blue or green egg,” Leslie Citroen said in a Marketplace report. “The other one is the Black Copper Marans, which lays black copper eggs. That’s extremely popular, too.”

Citroen is the owner of Mill Valley Chickens and a luxury chicken entrepreneur. Her company – and its online sister company Judy Chicken – sells everything from signs, pillows and chicken “peace flags” to galvanized water troughs and those little stamps you can put on an egg. Oh, and of course chickens.

But not just any ordinary chicken. Citroen’s chickens are, according to her website, “sourced from top hatcheries and have been raised in strictly clean cages and hygienic conditions”. That means twice-daily cleaning and cages that are bathed in a natural light without wire flooring. Her chicks are given organic feed only and are up to date on all vaccinations. A baby chicken can run anywhere between approximately $20 and $50 depending on their type and when they were born. (It’s bad luck, however, if you get a rooster.) “Heritage breeds”, which are rare, non-industrial birds with a traceable genetic line, can go for as much as $350 apiece.

Chicken rearing is growing in popularity – particularly in metropolitan areas around the country. that 93% of the 150 most populated US metro areas allow backyard flocks of chickens and the US Department of Agriculture found that one in every 100 households in the metro areas of Denver, Los Angeles, Miami and New York City keeps some form of live poultry. But there’s no better place for the luxury chicken entrepreneur than the epicenter of over-the-top American luxury in the 21st century: San Francisco’s Bay Area.

Scott Vanderlip, a software engineer by day and a chicken enthusiast otherwise, runs a free, self-guided bicycle tour of chicken coops and gardens in the Silicon Valley area for hobbyists and fans. His organization, called Tour De Coop, also sells shirts, sweatshirts and other clothing items to cover its costs. Laura Menard, a schoolteacher and chicken breeder, has custom-built chicken coops with antique stained-glass windows and detailing added by a master carpenter. “Technology may pay the bills, but it doesn’t feed your soul,” said Menard to CBS News. “Chickens, that’s one way to feed your soul.”

Someone’s soul is being fed well because this stuff is not cheap. According to a Washington Post report, entrepreneurial contractors are building $20,000 coops complete with solar panels, automated doors, internal lighting and video cameras that are built with expensive redwood and reclaimed materials so that the coop fits into the aesthetic of the owner’s home. There’s actually a Williams-Sonoma coop as well, called “the Range Rover of chicken cribs”, that is made from “sustainable red pine” and is “chemical free”.

Finding a niche and excelling in it is the key to making money for many business people. And if that niche happens to be in a luxury market where people don’t mind spending $350 for a chicken? All the better. “If you’re living in a $15m house, you’re not going to buy a chicken coop off of Amazon that comes from China for $200,” Citroen said in the Marketplace report. That fact would make any entrepreneur cluck, just a little.

Jamaica: NWC, concerned, but not yet alarmed at decreasing water levels