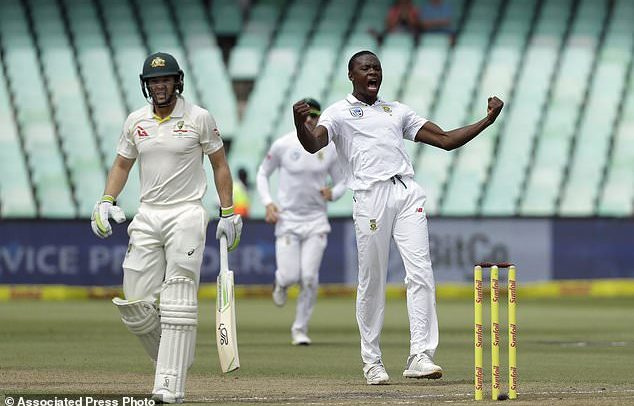 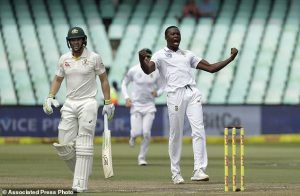 Mitchell Marsh fell four short of a century as he took Australia to 351 all out on Day 2 of the first test against South Africa on Thursday.

Marsh was caught at mid-on trying to hit over the top of the infield to get to three figures, but despite that personal disappointment, his innings took Australia to what appeared to be a competitive score on a sluggish surface at Kingsmead.

Marsh’s 96 was made through three significant lower-order partnerships for Australia, which lifted the Ashes winners from 177-5 on Day 1. He put on 60 with Tim Paine for the sixth wicket, 49 with Mitchell Starc for the eighth wicket, and 41 with Nathan Lyon for the ninth wicket.

Those added up to a big contribution to Australia’s ultimately decent first total of the four-test series.

Marsh was the second-last wicket to fall as he hit up in the air to mid-on and Morne Morkel reached up to hold onto the catch, giving seamer Vernon Philander his third wicket. Nathan Lyon was out an over later for 12 to wrap up Australia’s innings.

Australia lost Paine and Pat Cummins early on the second day to the second new ball, and then Starc to the last delivery before lunch.

South Africa pacer Kagiso Rabada made early use of the new ball to have Paine caught behind for 25 and end his overnight partnership of 60 with Marsh. Australia had added just 12 runs when Paine edged to wicketkeeper Quinton de Kock.

Marsh went on to 60 not out at lunch after having survived a low caught and bowled chance to Rabada when he was on 42. If Rabada had taken the sharp catch down near his ankles as he followed through, Australia would have slipped to 244-7 and Marsh would have been back in the dressing room.

He didn’t, and Marsh pushed the Aussies on and well beyond 300 despite a slow wicket that’s given the opening test of a much-hyped series a grinding feel over the first two days.

However, the Australians will surely be happy with 351 after slipping to 177-5. That recovery was down to the late-order runs that Marsh oversaw. Australia’s last five batsmen added 174, nearly as much as the 177 made by the top five.

Marsh hit 13 fours and a six and he nearly followed up on a century in his last innings, against England in the last match of the Ashes. Starc also gave Australia some momentum by striking four fours and two big slog-sweeps for six over wide long-on off Maharaj in his attacking innings.

David Warner (51) and Steve Smith (56) both made half-centuries on Day 1, and Shaun Marsh made 40, but none of them went on to a big score as the Aussies were initially kept in check.

Venezuela presidential election pushed back to May