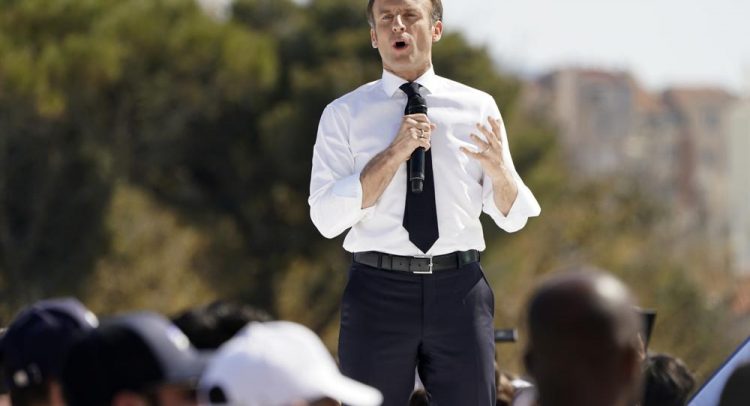 PARIS (AP) — French President Emmanuel Macron held a major campaign rally Saturday in Marseille, touting his environmental and climate accomplishments and future plans in a bid to draw in young voters who supported more politically extreme candidates in the first round of France’s presidential election.

Citizens and especially millennials in Marseille, a multicultural southern French city on the Mediterranean, favored hard-left presidential candidate Jean-Luc Melenchon over the centrist Macron in the April 10 first round of voting. Marseille’s young voters, who leaned mainly to the far right and the far left last Sunday, are particularly engaged with climate issues — a point which Macron hoped to capitalize on in a rousing speech at the edge of the glistening sea.

“I hear the anxiety that exists in a lot of our young people. I see young people, adolescents, who are fearful about our planet’s future,” he said.

Macron is facing off against far-right challenger Marine Le Pen in France’s April 24 presidential runoff after 10 other candidates, including Melenchon, were eliminated in the first round of voting.

For many who voted for left-wing candidates in the first round, the presidential runoff vote is an unpalatable choice between a candidate who is anathema to them, Le Pen, and a president who some feel has veered to the right of center during his first term. The runoff outcome could depend on how left-wing voters make up their minds: between backing Macron or leaving him to fend for himself against Le Pen.

Macron has mixed green credentials, something he hopes to improve on. Although he was associated with the slogan “Make The Planet Great Again,” in his first five-year term he capitulated to angry yellow vest protesters by scrapping a tax hike on fuel prices.

To cheers on Saturday, Macron said his next prime minister would be placed in charge of environmental planning as France seeks to become carbon neutral by 2050. He also promised more public transport nationwide to wean people off being dependent on cars.

Even though Macron came out on top in the first round of voting, the 44-year-old incumbent has acknowledged that “nothing is decided” in the increasingly tight race to become France’s next leader. In Marseille, he targeted his rival Le Pen, who has gained increasing support in recent weeks.

“The far-right represents a danger for our country. Don’t just hiss at it, knock it out,” he said, warning about the political dangers posed by overconfident supporters who abstain in the vital runoff vote.

Le Pen spent Saturday reaching out to voters in Saint-Rémy-sur-Avre, a village in northwestern France where she visited an antiques market.

While campaigning Friday, both candidates were grilled over their differing stances on Muslim religious dress in public spaces — Le Pen wants to ban headscarves in France, a country that has Europe’s largest Muslim population. Both Le Pen and Macron were confronted by women in headscarves who asked why their clothing choices should be caught up in politics.

Across France, protesters are railing against a host of issues ahead of the presidential runoff.

In the center of Paris on Saturday, the environmental group Extinction Rebellion launched a three-day demonstration against what they call France’s inaction on climate issues. The activists say their objective is “to put climate issues back at the center of the presidential debate.”

At a Paris march against racism on Saturday, many left-wing voters described the runoff choices as agonizing. Some said they would hold their noses and vote for Macron, simply to block Le Pen. But many said they wouldn’t vote at all or would cast a vote with no name. One marcher said they had barely slept and repeatedly wept since Melenchon came in third in the first round after Le Pen.

Faridi Djoumoi said he voted for Macron in round one but he still protested with a sign that read “Better a vote that stinks than a vote that kills,” in hopes of convincing people to rally around the president against Le Pen.

“The vote that stinks is Emmanuel Macron, because there have been a lot of problems under his leadership,” he said. “The vote that kills is the National Rally, Marine Le Pen, … a party founded on hatred.”