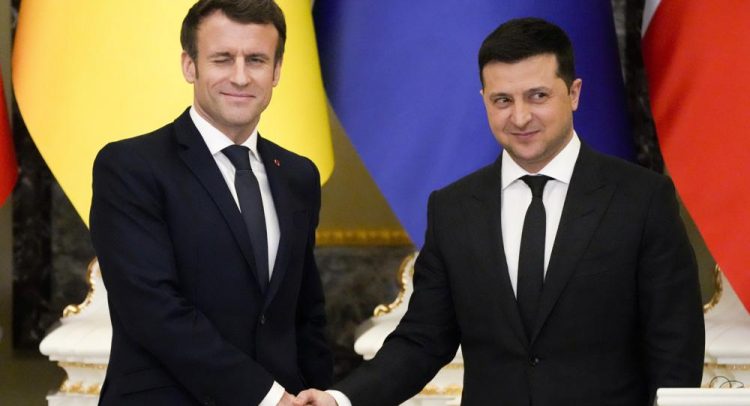 By SYLVIE CORBET and DASHA LITVINOVA

Macron also said it would take time to find a diplomatic solution to the rising tensions, which represent the biggest security crisis between Russia and the West since the Cold War.

His remarks on a visit to Kyiv came as the Kremlin denied reports that he and Putin struck a deal on de-escalating the crisis. Kremlin spokesman Dmitry Peskov said that “in the current situation, Moscow and Paris can’t be reaching any deals.”

Macron met with Ukrainian President Volodymyr Zelenskyy amid mounting fears of a Russian invasion. Moscow has massed over 100,000 troops near Ukraine’s borders, but insists it has no plans to attack.

The Kremlin wants guarantees from the West that NATO will not accept Ukraine and other former Soviet nations as members, that it halt weapon deployments there and roll back its forces from Eastern Europe — demands the U.S. and NATO reject as nonstarters.

At a news conference after meeting Zelenskyy, Macron said Putin told him during their more than five-hour session Monday that “he won’t be initiating an escalation. I think it is important.”

According to the French president, Putin also said there won’t be any Russian “permanent (military) base” or “deployment” in Belarus, where Russia had sent a large number of troops for war games.

Peskov said withdrawing Russian troops from Belarus after the maneuvers was the plan all along.

Zelenskyy said he would welcome concrete steps from Putin for de-escalation, adding he didn’t “trust words in general.”

“Let’s not be naive,” he said. “Since the beginning of the crisis, France hasn’t been inclined to exaggerate, but at the same time, I don’t believe this crisis can be settled in a few hours, through discussions”

“We have a common view with President Macron on threats and challenges to the security of Ukraine, of the whole of Europe, of the world in general,” Zelenskyy said.

He said France was giving 1.2 billion euros ($1.3 billion) in financial aid to Ukraine and helping restore infrastructure in the war-ravaged east of the country.

Western leaders in recent weeks have engaged in high-level talks, and more are planned amid the backdrop of military drills in Russia and Belarus. On Tuesday, Russia’s Defense Ministry said six large warships were moving from the Mediterranean to the Black Sea for exercises.

Macron said he had not expected Putin to make any “gestures” Monday, saying his objective was to “prevent an escalation and open new perspectives. … That objective is met.”

Macron said Putin “set a collective trap” by initiating the exchange of documents with the U.S. Moscow submitted its demands to Washington in the form of draft agreements that were made public, and insisted on a written response, which was then leaked.

“In the history of diplomacy, there was never a crisis that has been settled by exchanges of letters which are to be made public afterward,” he said, adding that’s why he decided to go to Moscow for direct talks.

Putin said after the meeting that the U.S. and NATO ignored Moscow’s demands, but signaled readiness to continue talking. He also reiterated a warning that NATO membership for Ukraine could trigger a war between Russia and the alliance should Kyiv try to retake the Crimean Peninsula, which Moscow annexed in 2014.

NATO, U.S. and European leaders reject the demands that they say challenge NATO’s core principles, like shutting the door to Ukraine or other countries that might seek membership; but they have offered to discuss other Russian security concerns in Europe.

U.S. President Joe Biden has said any prospect of Ukraine entering NATO “in the near term is not very likely,” but he and other alliance members and NATO itself refuse to rule out Ukraine’s future entry.

Biden met Monday with German Chancellor Olaf Scholz, who also will travel to Kyiv and Moscow on Feb. 14-15. They threatened Russia with grave consequences if it invaded, and Biden vowed that the Nord Stream 2 Russia-to-Germany gas pipeline, which has been completed but is not yet operating, will be blocked. Such a move would hurt Russia economically but also cause energy supply problems for Germany.

British Prime Minister Boris Johnson, in an article in the Times of London, also urged allies to finalize heavy economic sanctions that would take effect if Russia crosses into Ukraine. He said the U.K. is ready to bolster NATO forces in Latvia and Estonia as he prepared to meet the Lithuanian prime minister in London to show support for the Baltic nations.

More than 100 U.S. military personnel arrived in Romania ahead of a deployment of about 1,000 NATO troops expected in the country in the coming days, Romania’s Defense Minister Vasile Dincu said.

U.S. officials have said that about 1,000 alliance troops will be sent from Germany to Romania, a NATO member since 2004. Romania borders Ukraine to the north. About 1,700 U.S. soldiers from the 82nd Airborne are also going to Poland.

U.S. officials have portrayed the threat of an invasion of Ukraine as imminent — warnings Moscow has scoffed at, accusing Washington of fueling tensions.

Russia and Ukraine have been locked in a bitter conflict since 2014, when Ukraine’s Kremlin-friendly president was ousted, Moscow annexed Crimea and then backed a separatist insurgency in the east of the country. The fighting between Russia-backed rebels and Ukrainian forces has killed over 14,000 people.

In 2015, France and Germany helped broker a peace deal, known as the Minsk agreements, that ended large-scale hostilities but failed to bring a political settlement of the conflict. The Kremlin has repeatedly accused Kyiv of sabotaging the deal, and Ukrainian officials in recent weeks said that implementing it would hurt Ukraine.

After meeting Macron, Putin said without elaboration that some of the French president’s proposals could serve as a basis for a settlement of the separatist conflict, adding that they agreed to speak by phone after Macron’s visit to Kyiv.

Peskov said such a call would take place “in the nearest future.”

Macron said both Putin and Zelenskyy confirmed they were willing to implement the Minsk agreements — “the only path allowing to build peace … and find a sustainable political solution.”

Macron also said the presidential advisers of France, Germany, Russia and Ukraine will meet Thursday in Berlin on the next steps. “It will take time to get results,” he said.

Zelenskyy was mum on where Ukraine stands on implementing the Minsk agreements and whether he assured Macron that Kyiv is committed to do so, saying only that his country views Thursday’s meeting “very positively” and hoped for a subsequent meeting by the four leaders.

German Foreign Minister Annalena Baerbock, visiting the front line in eastern Ukraine’s Donbas region, said she wanted “to get an impression of what it means that we still have war in the middle of Europe.”

Germany has given Ukraine about 1.8 billion euros in aid since 2014, part of which is helping those displaced by fighting.

French President Emmanuel Macron, left, winks as he shakes hands with Ukrainian President Volodymyr Zelenskyy after a joint news conference following their talks in Kyiv, Ukraine, Tuesday, Feb. 8, 2022. Diplomatic efforts to defuse the tensions around Ukraine continued on Tuesday with French President Emmanuel Macron arriving in Kyiv the day after hours of talks with the Russian leader in Moscow yielded no apparent breakthroughs. (AP Photo/Efrem Lukatsky)