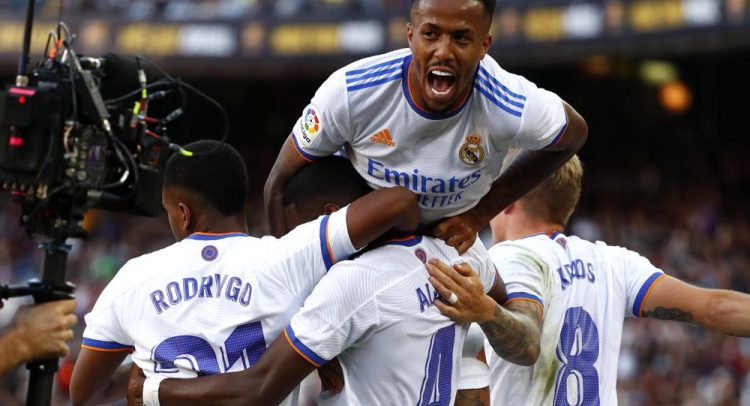 MADRID (AP) — Real Madrid, Real Sociedad and Sevilla are the ones getting things done in the Spanish League.

After the first 10 matches, it’s close at the top with six teams within three points of the lead. Madrid is the powerhouse looking the best as defending champion Atlético Madrid stutters because of its unusual defensive problems and Barcelona continues to struggle without Lionel Messi.

Sociedad and Sevilla are the outsiders showing the most potential so far.

Sociedad has 21 points from 10 matches, with Madrid and Sevilla a point behind with a game in hand. Atlético, Real Betis and Osasuna are three points off the lead, while Barcelona is in ninth place, six points behind.

Madrid was the best team before consecutive losses — at Espanyol in the Spanish league and against Sheriff at home in the Champions League — raised doubts. But the team rebounded with a 5-0 rout at Shakhtar Donetsk and a convincing 2-1 win over Barcelona in the league “clásico” at Camp Nou on Sunday.

“This team has a lot of quality, we have to enjoy it,” Madrid coach Carlo Ancelotti said. “I’m satisfied because we got the three points in a difficult match. Barcelona didn’t make it easy for us.”

Madrid’s attack — led by Karim Benzema and Vinícius Júnior — has been carrying the team so far with 24 goals in nine league matches. But two defenders got the goals on Sunday, David Alaba and Lucas Vázquez.

Madrid’s next match is on Wednesday at home against surprising Osasuna, which has won four of its last six matches.

Barcelona got off to a disappointing start to the season without Messi, but there was some optimism surrounding the Catalan club after consecutive victories entering the clásico. The team’s lackluster play on Sunday came as a reality check, though, keeping it mid-table and adding pressure on coach Ronald Koeman.

“A loss in a clásico means more than losing the three points, but there is no time for a letdown,” Koeman said. “We have another game on Wednesday and we have no alternative but to pick ourselves up. We are disappointed now, but we have to start preparing for the next match right away.”

Barcelona plays Rayo Vallecano on Wednesday, a team coming off a loss at Real Betis but in seventh place.

Atlético has a potent attack with Luis Suárez, Antoine Griezmann and João Félix, but its defense has been uncharacteristically weak under coach Diego Simeone this season.

Atlético had to come back from a two-goal deficit to salvage a 2-2 draw at home against Sociedad on Sunday. The team has conceded five goals in its last two matches in all competitions, and has only one clean sheet in its last six games.

“It’s a concern and we have to try to fix it,” Simeone said ahead of Thursday’s visit to Levante, which has yet to win this season.

With an offensive style that has impressed early on, Sociedad has been able to hold onto the league lead. The team could have had an even bigger advantage at the top had it not faltered against last-place Getafe a few weeks ago. Sociedad visits Celta Vigo on Thursday.

Sevilla, solid under coach Julen Lopetegui, has won four of its last five league games, with the only setback a loss at Granada. The team visits Mallorca on Wednesday.’