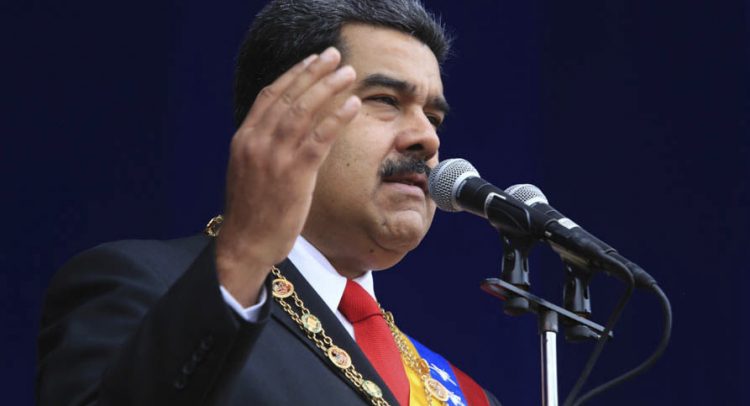 The main opposition New Democratic Party (NDP) is suggesting that the Ralph Gonsalves administration in St. Vincent and the Grenadines cares more about the security of Venezuela’s president, Nicolas Maduro, than the wellbeing of residents of SVG.

The party’s suggestion came in a press statement this week — its second in two weeks — in which it said it is “time to stem the crime spree in SVG”.

“The ULP regime, which committed itself to waging a war on crime and the causes of crime, has offered no discernible, acceptable response to what appears to be a veritable crime spree amid growing disrespect for human life,” the statement said.

The NDP said the responses of the ULP administration have taken the form of “a seemingly garrulous presentation on the sociology of crime by Dr. Ralph Gonsalves and what may have been a street-level analysis from [Senator] Julian Francis — who essentially told law abiding Vincentians that they were safe once they walked on their side of the road and let the criminals shoot and kill on the other side of the road.

“In contrast, Dr. Ralph Gonsalves and the ULP have, within 24 hours of an uncorroborated assassination attempt in Venezuela, issued a strongly worded public condemnation and justified a rally in support of President Nicolas Maduro. Yet they maintain an apparent indifference to the murders and criminal mayhem that has overtaken our country. The question must therefore be asked, where do the lives of Vincentians fall relative to President Nicolas Maduro?”

In a statement sent to the media on Aug. 6, the Ministry of Foreign Affairs in Kingstown expressed “its strong condemnation of the assassination attempt on the life of H.E Nicolas Maduro, the duly elected President of the Bolivarian Republic of Venezuela, in Caracas, on Saturday August 4, 2018 during the special event to commemorate the 81st Anniversary of the founding of the Bolivarian National Guard”.

The ministry said SVG considers “this senseless terrorist act totally unacceptable and denounces any attempt by forces internal or external to Venezuela, to undermine the legitimate government of the Bolivarian Republic of Venezuela. As such, Saint Vincent and the Grenadines reaffirms its commitment against terrorism, in all its forms and manifestations, including its financing”.

The statement further said that SVG “stands in solidarity with the Government and People of the Bolivarian Republic of Venezuela in the defense of its sovereignty. Further, we reiterate our call for the upholding of principles of non-interference and non-intervention into the internal affairs of states.

“The Government and People of Saint Vincent and the Grenadines also express their profound sympathy to those who were injured or affected in any way by this dastardly act. We trust that a full and speedy investigation will reveal the culprit and that they will be brought to justice.”

Also, the Venezuelan-Vincentian Friendship Association (VENVIFA) held a rally on Aug. 8, in front the Venezuelan embassy on Murray’s Road, Kingstown in solidarity with Maduro and his country.

The NDP said this week that it “remains deeply concerned with the rising level of homicides in this country, especially after having two consecutive years of record homicides”.

The statement said that the most recent killing in SVG — the Aug. 6 chopping death of James Gould — brought the homicide count in SVG to 18 this year.

“His death is but the latest in a seemingly rash spell of brutal murders that undoubtedly affects Vincentians to the very core,” the NDP said.

“The seemingly endless reports of homicides, attempted homicides and wounding are creating a fast-growing feeling of fear and insecurity among the people of this country and must be viewed against the backdrop of the broader crime situation which includes everything from praedial larceny and robberies through to excessive corruption.”

The NDP said that since the ULP came to office, the number of murders committed in a single year have expanded exponentially.

“The NDP calls on the government, particularly the Minister of National Security, to be proactive and bring the nation together to address crime, and crime-related issues in St Vincent and the Grenadines. The once much-vaunted ‘Contract with Civil Society’ spoke so much about collective action in the public interest only to be cast aside, left gathering dust while the leadership engages in the usual bravado of how well the nation is doing — a truly blinkered perspective if ever there was one.

“The NDP urges the Vincentian public to be vigilant. Let us unite to take back our country from the criminal elements who are anxious to take us down a horrible path of death and destruction. We implore anyone with information that might assist the police in their investigations to provide it to the police and we call on the police to redouble their efforts to bring the perpetrators to justice,” the party said.

Hours before his arrest, a Colorado man pleaded for his family's return