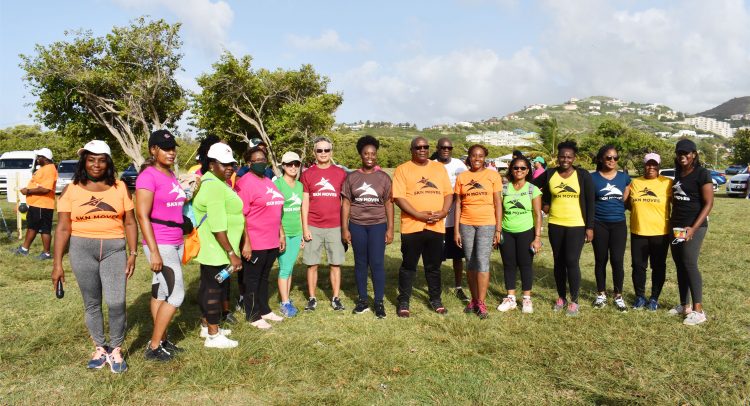 Prime Minister Dr the Hon Timothy Harris is again reiterating that health comes first and is advising that the Federation of St. Kitts and Nevis will prosper only if its people are healthy, observing that the health of a nation becomes its wealth.

“Your health must be given priority,” said Prime Minister Harris on Saturday August 8 at the Frigate Bay lawns as he congratulated hundreds who had participated in the SKN Moves anniversary Health Walk. He observed that if persons are not healthy they will not be able to accomplish much in anything that they do.

Dr Harris, who also has lead responsibility for Human Resource Development, Health and HIV/AIDS issues in the CARICOM’s quasi-cabinet, told the walk participants: “The advice is that we make health our number one priority. The health of the nation becomes the wealth of the nation, because only if we have healthy people working and contributing to the best of their abilities can we generate a prosperous country and stand stronger and safer.”

The health walk, which started at the Caribbean Cinemas parking lots in West Basseterre and ended at the Frigate Bay lawns, was a collaboration of the Office of the Prime Minister and the Ministry of Health. It was held as part of the first anniversary of SKN Moves which was launched last year on August 9 at West Independence Square.

Also participating in the walk was Resident Ambassador of the Republic of China on Taiwan His Excellency Tom Lee and Mrs Lee, and members of the embassy staff. Prime Minister Harris thanked Ambassador Lee “for participating, and for the contribution which your government has been making into the health sector and beyond the health sector to the socioeconomic life of St. Kitts and Nevis.”

“Out of the concern with respect to obesity in the region, the notion of our people becoming more involved in physical activity was given birth to, and out of that we had the Caribbean Moves being developed, and each member state within CARICOM was required to form a branch so that we know that the regional approach to challenging obesity was being supported in every member state,” said the Honourable Prime Minister.

He said that last year around this time the government of St. Kitts and Nevis engaged in the formation of St. Kitts-Nevis Moves, and later in the year went to Charlestown and formed the Nevis branch of the SKN Moves. He noted he was happy that after one year, the country has kept the movement alive.

The government, he added, has plans to broaden the movement for it to get more persons involved in it. He requested persons that whatever they do, when they are engaged in physical activities that they wear their SKN Moves shirts to show that the association with which they are participating that they too are in support of the goals of SKN Moves.

CWI could trim board in response to task force recommendations