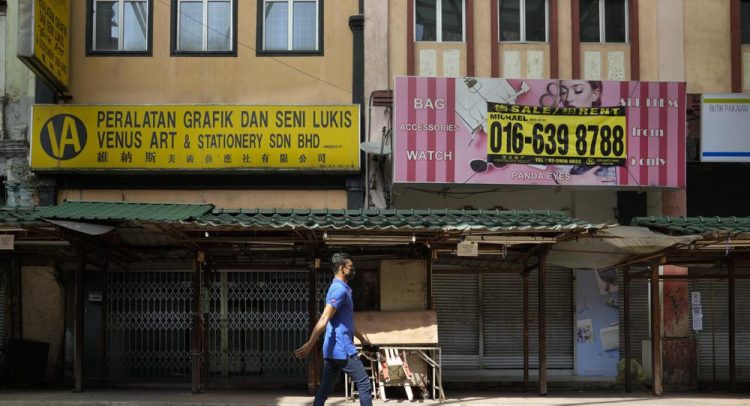 Malaysia announces $36B in aid after extending lockdown

The country has been under a near-total lockdown since June 1 that was due to expire Monday, but Prime Minister Muhyiddin Yassin said over the weekend that it will not be eased until new infections fall below 4,000 a day and at least 10% of the population has been vaccinated.

New daily coronavirus cases have come down from a peak of over 9,000 a month ago, but still remain high. The health ministry reported 5,218 new infections on Monday, bringing the country’s total to 739,266, including 5,001 deaths.

Muhyiddin said the financial package will include a 10 billion ringgit ($2.4 billion) fiscal injection. He said cash handouts will be given to 11 million households, senior citizens, a million workers who lost their jobs and another million small businesses.

An additional 3.8 billion ringgit ($916 million) will be used for wage subsidies in addition to loan moratoriums, tax breaks, grants and other measures to support businesses, he said.

“The government is working hard, even within limitations, to ensure the country remains on the right track of recovery … vaccination will be the key to our success in fighting COVID-19,” he said. So far, 6% of the population has been fully vaccinated and another 15% has received one dose, he said.

Many businesses have shut down due to the lockdown, the second in over a year. The World Bank has cut its growth forecast for Malaysia to 4.5% this year from an earlier estimate of 6%.

Earlier Monday, the eastern Sabah state on Borneo island said it will ease lockdown restrictions. State governments have jurisdiction over the lockdown implementation. Sabah is the only state so far that has decided to loosen curbs.

Sabah Chief Minister Hajiji Noor said more sectors including rubber, timber and furniture factories will be allowed to reopen from Tuesday. He said dine-in service will also be allowed at restaurants and hotels, hair salons will be able to operate and sports that do not involve physical contact such as golf and fishing can resume. Other restrictions will remain in place.

Sabah, a resource-rich but poor state, has recorded fewer than 200 new coronavirus cases a day.

Honourable Brantley endorses extension of State of Emergency in St. Kitts and Nevis