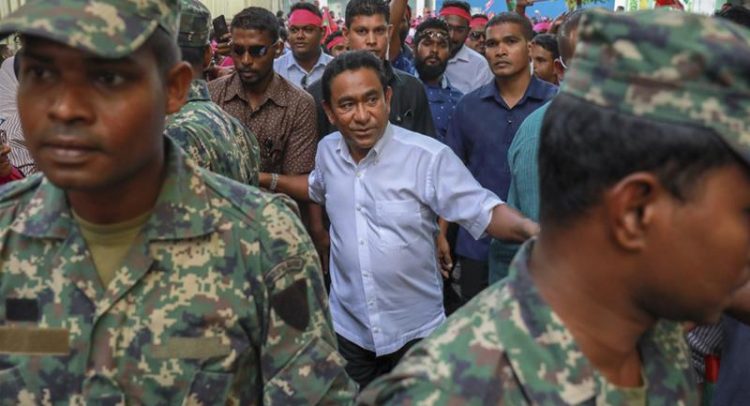 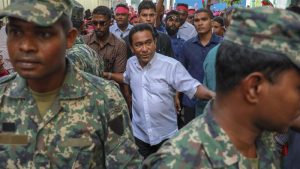 The Maldives government has declared a 15-day state of emergency as political tensions on the island nation continue to intensify with reports security forces stormed the Supreme Court and locked the justices inside.

The daughter of the country’s former president Maumoon Abdul Gayoom said soldiers broke through the door of their home on Monday and seized her father and husband.

Legal Affairs Minister Azima Shakoor made the state of emergency announcement on state television, and a statement attributed to President Abdulla Yameen was posted on the ministry of foreign affairs website.

The Maldives plunged into political turmoil last week after the country’s top court threw out a “terrorism” conviction against its former president Mohamed Nasheed, and ordered the release of other jailed opposition politicians.

The ruling dealt a blow to Yameen with critics accusing him of corruption, misrule, and rights abuses. He denies the allegations.

“The government does not believe that the Supreme Court ruling to release the political prisoners can be enforced,” Shakoor said.

Soldiers in riot gear surrounded the parliament building in the capital Male on Sunday soon after the opposition petitioned parliament to remove the South Asian island’s attorney-general and its chief prosecutor.

Husnu Al Suood, president of the Maldives Bar Association and a former attorney-general of the Maldives, tweeted that security forces broke into the Supreme Court offices and locked it up with the judges inside on Monday night.

Junayd Mohamed, a journalist with the Maldives Independent, told Al Jazeera he also heard reports that riot police and military officials were inside the court. He said they set up barricades to block off the area, but protesters were rallying outside.

“Hundreds of people [are] gathered outside who are calling on the security forces to arrest President Yameen and protect the Supreme Court,” Mohamed said.

The opposition now has a majority in the 85-member house as the court ruling also reinstated 12 members of parliament who were stripped of their seats last year.

But two of the 12 were arrested at the airport on Sunday, shortly after they returned to the Maldives after spending months in exile.

In a resolution signed in the capital Male on Sunday, opposition MPs called on the international community “to impress upon the government of Maldives the need to respect the rule of law, and implement last Thursday’s Supreme Court ruling that ordered the release of political leaders and the reinstatement of 12 opposition MPs”.

They also called for “all necessary measures … to hold government officials accountable for violations of national and international law”.

Tensions “could escalate to civil unrest and incite violence across the country”, they warned.

The United Nations, European Union, and several foreign governments – including India, the US and UK – have urged Yameen to comply with the Supreme Court’s order.

The government has accused the court of trying to oust the president, a claim judges have not responded to.

“The Maldivian government and military must respect the rule of law, freedom of expression, and democratic institutions. The world is watching,” the White House National Security Council said in a Twitter post.

Rights group Amnesty International denounced the government’s “appalling track-record of suppressing freedom of expression and any form of opposition”.