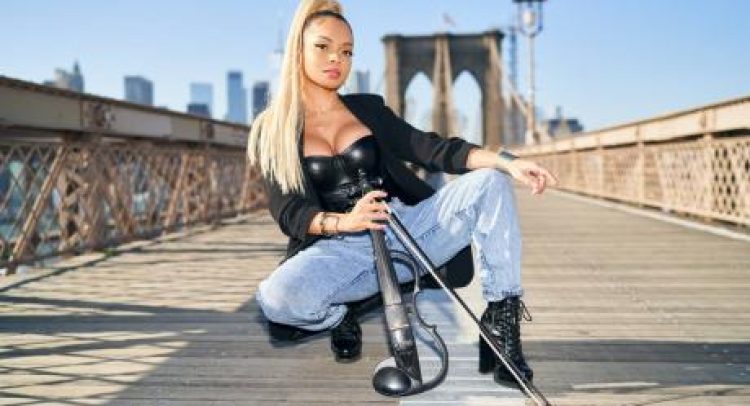 THE BARCLAYS Center in New York City was set ablaze a week ago, and it was not because the Brooklyn Nets, the home team, was bringing the heat for the first round of the 2021 NBA Play-offs against the Boston Celtics. At half-time, Beenie Man’s hit single, Who Am I, and Daseca’s 2004 Anger Management riddim resonated through the audio system of the multipurpose indoor arena, harmonised with the lustrous and eloquent sounds of a violin being played by Marie Baillet, known more popularly by her stage name, Mapy.

Her performance was exceptional, pulling the attention of sports fans. The experienced was amplified when the violinist pulled her strings to the tune of Koffee’s Toast in a way that would have spectators, whether they were Mapy fans, familiar with reggae music or of Jamaican background, wanting to put lighters in the air.

The Caribbean community in Brooklyn is massive, and her set would not make sense without music from the region, Mapy told The Gleaner.

“The Anger Management riddim is one of my favourites. It’s because of the strings, [and] it’s okay if nobody knows it because I simply love the way it sounds, and Caribbean people will know it. Beenie Man, on the other hand, his song is internationally known, [so] I knew more people would recognise it,” she said.

“I chose Koffee’s song because it is how I felt. Being given the gig to play for the half-time show … it was a blessing, and the song is beautiful. She’s also a Grammy Award winner, and I have so much love for her,” Mapy added.

The contemporary violinist, who travelled to Jamaica in 2018 to perform for the Youth View Awards, explained that often when booked for an event, the request is for her to do a full hip- hop set, but she very rarely sticks to that one genre. In many of her performances, no matter the occasion or audience, she always manages to include reggae, dancehall, and even soca music.

But how does she select her tracks from a Himalayan-sized collection of reggae classics and a list of new music multiplying daily? Mapy said, if it is for a Caribbean party, “it’s automatically easier as, naturally, people will know the songs, and I can be more open, but it all depends on where I am booked to play or what platforms”.

She said that Jamaican music does not get the credit it deserves. “We don’t hear enough of Jamaica’s genres on the radio. For a music that everybody is inspired by and loves, we don’t see a lot on the TV, especially in the US. So, I always find a way to introduce it. The first video I posted on social media, I was playing soca music with the violin, and it went viral because people never heard this before. I continue to do the same for reggae and dancehall. I feel like, before social media, only a small amount of people were making decisions about music, especially about classical instruments. If you’re a violinist, you had to play classical music. There are times people expect to hear something classical because it’s a violin, but I may end up playing dancehall, too, so people can hear it and because this is what I love.”

Her infused style of music has separated her from the pack, exposing her to a wide repertoire of superstars in the global music industry, such as Pharrell Williams and DaBaby, with whom she has travelled to perform. Yet, she remains humbled by her upbringing.

Reggae music permeated the walls of her home as a little girl. Hailing from the ethnically diverse French island of Réunion and raised in Paris, France, Mapy shares that hearing the genre was not uncommon.

“That’s how I was introduced to it; in Réunion island, everybody listens to reggae, but in our house, in particular, my mom played a lot of Bob Marley and The Wailers,” she said. “She had a lot of vinyl records and maybe all of their albums at the time, so it was really amazing because when she played them, the energy was different — it was so relaxed. As I became older, I started purchasing dancehall mixtapes of Sizzla, Capleton, Buju Banton (who I met at the 2019 St Kitts Music Festival) and Mavado, which I’d listen to after school or at work.”

Mapy devotedly speaks about her mother’s influence on her musical path, “a hard-working matriarch and single mother of five who worked as a housekeeper, learned to read and write on her own and despite all the obstacles she had to overcome, made sure we were fed; and sacrificed a lot so I could learn the violin from the age of six”. Her stage name is even a combination of the first names of her mother and father, Marie and Pierre.

“I don’t even own expensive violins. There’s probably one that is expensive only because I have it since I was 13 years old — a 19th-century Stradivarius acoustic violin that my mother purchased — the more it gets old, [the more] it increases in value. I used to feel so miserable when persons used to look at my violins and think they weren’t good because they were considered cheap or when they would ask how much my violins cost. But I am proud of what I have accomplished on my violins over the years.”

Mapy wants people to become more appreciative of the art created with the instrument and learn that traditional or classic may be transformed into modern. She is also passionate about teaching and has since established an online school, where she encourages inventiveness using all genres of music.

“I want to show young artistes they can do anything. They need to be true to themselves, and once they have a goal to make it big in the music industry, they should express it,” the violinist concluded.

Featured Photo – Mapy posing in the middle of the Brooklyn Bridge, posing for US-based photographer Rious.

St. Kitts & Nevis is getting there!