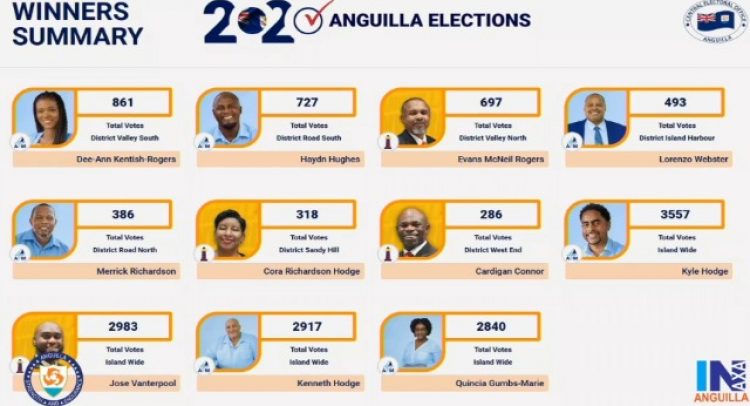 Basseterre, 30th June, 2020 (MyVue News.com)- It was perhaps one of the most exciting campaigns ever in the history of politics in Anguilla and the results too turned out to be quite a dramatic outcome.

But, just before 11:00 p.m. on Monday night, 29th June, 2020, the people of Anguilla were all aware that the following day, (Tuesday), would dawn with a new government in charge of the British dependent territory, that up to 1980, was still constitutionally, a part of the tripartite State of St. Kitts-Nevis-Anguilla.

The victory for the Anguilla Progressive Movement, (APM), was massive. It secured 3 of the 4 Island wide seats and 4 of the the 7 district seats, giving it a total of seven seats in the 11 member Anguilla House of Assembly.

Therefore, those who scored victories for the APM included its leader and Premier-elect, Dr. Lorenzo Webster, Kyle Hodge, (who amassed the largest number of votes, overall, in the elections), Hayden Hughes, Merrick Richardson, Kenneth Hodge, Quincia Gumbs-Marie and Dee-Ann Kentish-Rogers.

In contrast, there was a poor showing by the outgoing Anguilla United Front, AUF.

They were not even able to save their leader and outgoing Premier, Victor Banks, who lost his seat to a new comer to politcs, Kentish-Rogers, by a margin of 106 votes.

The AUF managed to hold on to four seats, from 3 Districts and 1 from the Island-wide pool.

Unlike St. Kitts and Nevis and other Caribbean countries that have constituencies contested for by various candidates, in Anguilla, there is a dual system that features 4 seats contested island-wide with all of the electorate voting for the top four candidates.

Then there are 7 constituencies or Districts as they are called, with parties and independents vying for the voters approval.

This election cycle had one new but important feature.

For the first time, the island voted using an electronic system that facilitated the speedy return of results, which last night took less than three hours after all the ‘boxes’ were brought to the central counting center, which was the House of Assembly, in the island’s capital, The Valley.

However, despite their major victory, leader of the APM and now Premier-elect, Dr. Webster, last night immediately requested a recount in three contests, namely, Districts 2,3 and 7, that were declared in favour of the AUF.

The results of the recount is expected to be known sometime today or on Wednesday.

Main photo: A winners summary from the Anguilla 2020 elections (In Anguilla)