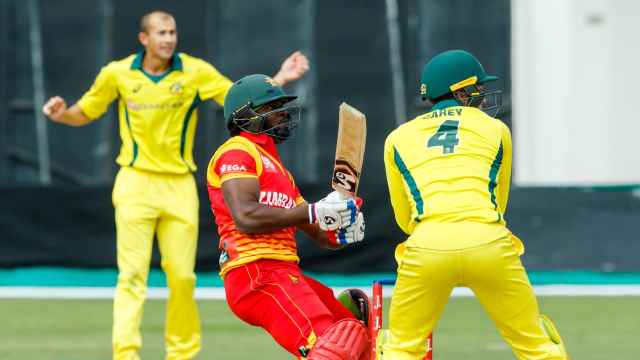 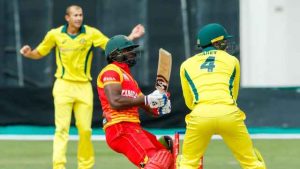 Call this a dead rubber all you want; this game had more life in it than perhaps all the others in this tri-series put together. Zimbabwe, backed vocally by the small crowd that turned up in freezing conditions in Harare, put up their best performance of the tournament, falling agonisingly short in the end. In a series desperately lacking close contests, the last game before the final provided a memorable finish to warm the hearts of those that sat shivering in the stands. They might not have got the result they came for though, with Marcus Stoinis smashing Donald Tiripano over midwicket for four with one ball remaining to ensure Zimbabwe finished the series winless.

Cricket – even T20 cricket – isn’t nearly like football, where it can be quite impossible to miss when a game turned on its head. Not least because in football, those moments coincide with bulging nets and raucous celebrations. Without a shot played in anger, slowly, almost imperceptibly, Australia turned around a game that, for a good half hour, looked like it was Zimbabwe’s to lose. If you hadn’t been paying much attention, there would have been a startling moment when you realised you weren’t going to get the upset you’d popped in front of the TV for, but what looked a routine Australian stroll to victory. It wasn’t quite as simple as that in the end, but the win did come thanks to a century partnership between Travis Head and Glenn Maxwell – the latter making 56 off 38 – as Australia chased down the 152-run target.

Having put up a below par score, Zimbabwe began spectacularly with the ball, Wellington Masakadza and the precocious Blessing Muzarabani keeping Australia on a leash in the Powerplay. An ill-timed hoick by Aaron Finch to cow corner deprived the visitors of their captain and trump card. A couple of overs later, Muzarabani drew an outside edge from the other opener Alex Carey for a simple catch behind the wicket. Australia’s middle order, which had looked so thoroughly second-string against Pakistan on Thursday, looked like it might get another severe examination, with the asking rate climbing slowly and Zimbabwe looking a different side to the one Australia had steamrolled earlier in the week.

But as the Powerplay ended, Zimbabwe moved the fielders back out, and the pressure on Maxwell and Head eased. The ones and twos began to come easier, and Maxwell, having got his eye in, was threatening to return to the sort of form that turns asking rates to laughing stocks. An exquisite six over extra cover in the tenth over was a harbinger of the carnage to follow, and the partnership began to develop as Australia expertly took control of the chase. Zimbabwe’s bowling, which had looked so potent with the field in, again assumed the distinctly ordinary appearance that has been the downfall of their side in so many games over recent years. That over was the start of a period that saw Australia score 51 runs in five overs, and even as Masakadza switched his bowlers around, it didn’t seem like anything would dissuade the pair from applying the finishing touches to what was turning into a decisive win.

But when the young Muzarabani – who was fabulous at both top and tail of the innings – returned, Zimbabwe perked up again. He coaxed a false shot to extra cover from Maxwell off just his second ball back, and suddenly the Australia of the first few overs seemed to have returned. Two more wickets fell quickly and the game became a tough scrap that went to the final over, but Australia were slightly better at holding their nerve, and that, really, was the difference in the end.

Earlier on, Solomon Mire put on another superb showing at the top of the order with 63 off 52 balls, anchoring a stuttering Zimbabwean innings, which could never assume the fluency required to post a good enough total. They lost three early wickets, which forced Mire and Peter Moor into consolidation mode at a time when they would have preferred to kick on. At times the partnership almost seemed to be breaking up any momentum Zimbabwe built, rather than setting them up for the final flourish.

When Moor, who was 14 off 20 at one point, finally did get going, carting Stoinis for 15 runs in the 14th over, he lost his wicket soon after. It was left to Mire again to be the sole torchbearer for the hosts, and while he did so admirably, the final total they put up wasn’t quite enough to place any real pressure on the Australians. Zimbabwe have real positives to build on for the upcoming five-match ODI series against Pakistan which begins on July 13, particularly the form of Mire and Muzarabani. The table might show them to be pointless, but the performances on the field strongly suggest otherwise.