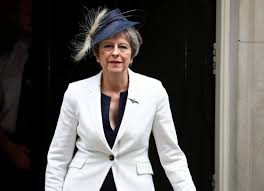 May presses on with Brexit plan after high-profile resignations

British Prime Minister Theresa May won support from many of her ministers, including a leading eurosceptic, on Tuesday after two top cabinet members quit saying her Brexit plan was too half-hearted.

May said she had chaired a “productive” meeting of her government, unswayed by the resignations on Sunday and Monday of Foreign Secretary Boris Johnson – the face of Brexit for many Britons – and Brexit negotiator David Davis.

U.S. President Donald Trump acknowledged that his visit to Britain from Thursday came at a time of “turmoil”.

Among those rallying around May was environment minister Michael Gove – a prominent campaigner to exit the European Union alongside Johnson before the 2016 referendum – who said he would not resign.

With less than nine months left until Britain is due to leave the bloc, May is sticking to her plan for a “business friendly” Brexit.

She looks set on facing down hardline Brexit supporters in her Conservative Party who are livid over her plans to negotiate a “free trade area for goods” with the EU. One described accepting EU rules as “the ultimate betrayal”.

Above a picture of her cabinet, including her new foreign secretary, Jeremy Hunt, and Brexit minister Dominic Raab, May tweeted: “Productive Cabinet meeting this morning – looking ahead to a busy week.”

Many injured as plane crashes in S Africa