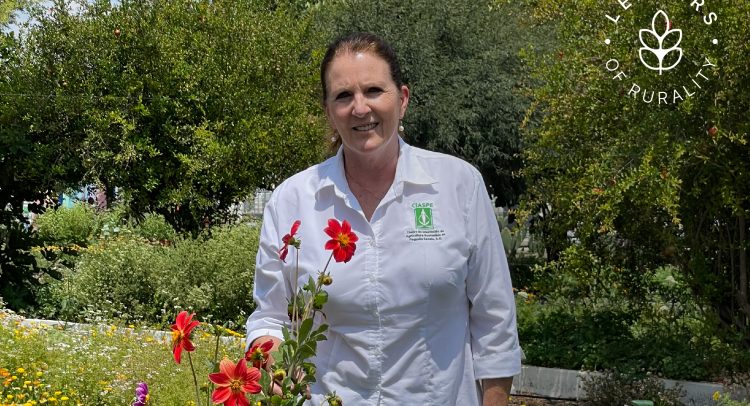 San Jose, 21 June 2021 (IICA). Gabriela Lucas Deecke, an agronomist from Mexico and founder and CEO of the Center for Innovation on Small-Scale Sustainable Agriculture (CIASPE, in Spanish)—an organization aimed at strengthing the self-management capabilities and resilience of small-scale female farmers—will receive the “Soul of Rurality” award, bestowed on noteworthy Leaders of Rurality in the Americas by the Inter-American Institute for Cooperation on Agriculture (IICA).

CIASPE works to support the wellbeing of rural families through regenerative agroecological practices.

“This award pays tribute to those who are playing a unique dual role: guaranteeing food and nutritional security by producing under all circumstances, and protecting the biodiversity of the planet. It will also emphasize their capacity to be positive role models in the rural areas of the region”, stated Manuel Otero, Director General of IICA.

Within the framework of this initiative, IICA strives to ensure the recognition opens spaces for cooperation with state, civil society, and private sector organizations to gain support for their causes.

“These are people whose influence can be seen in the food that we eat—wherever it may end up—and in each plot of agricultural land and in the communities where farmers and their families live. These are men and women who are leaving their mark and are the soul of rurality because they produce, plant, harvest, create, innovate, and unite”, reflected IICA’s Director General upon launching the initiative.

“They embody silent leadership, which is something we should spotlight and recognize. Above all, they are role models, because they transform, overcome adversity, and inspire”, he added.

From Querétaro, Gabriela Lucas Deecke works to create stronger connections between agriculture and nutrition and to improve life in rural areas

Mexico City. After graduating high school, Gabriela Lucas Deecke began to study nursing. It was during one of her internships that she experienced a life-changing event: a severely malnourished child died in her arms. That day she promised herself to work to ensure similar events would never repeat themselves. Shortly thereafter, she decided to study agronomy to join the fight for healthier foods that would be accessible to everyone.

In turning to food production, Gabriela returned to the path she had been on ever since she can remember. Gabriela was raised on a coffee farm in the municipality of Tapachula, in the state of Chiapas in southern Mexico. There, she grew up in connection with nature and in constant contact with the farmers who would come to work the field, often from neighboring Guatemala.

After she graduated with a degree in agronomy, Gabriela soon discovered the reality of small-scale farmers in the country. As part of a nonprofit, she traveled first to Chihuahua near the United States border, where she worked on projects related to food security in the desert. Upon her return to Querétaro, Gabriela became technical secretary of the local Ministry of Agriculture, a role that gave her the opportunity to get involved in the State’s many social and production problems.

One issue that drew her attention was the high prevalence in rural areas of noncommunicable diseases, like diabetes, hypertension, cancer, and obesity. “They are all food related”, explained Gabriela. “One tends to idealize the countryside, but the majority of people don’t know how to take care of and heal themselves with food instead of medication”.

In 2011 Gabriela knew she wanted to devote her life to training family farmers on how to produce abundant, healthy and nutritious foods for their families and communities. As a result, she founded the Center for Innovation on Small-Scale Sustainable Agriculture (CIASPE), an organization aimed at strengthening the self-management capabilities and resilience of small-scale farmers—and particularly female leaders—whose primary purpose is to contribute to the wellbeing of families in rural areas through regenerative agroecological practices.

“Today, one of our priorities is to share information with small-scale farmers on how to make better decisions regarding food; not only on how to produce, but also on how to eat better, including more fiber and vitamins for a healthier lifestyle”, says Gabriela.

Perhaps the greatest challenge the organization faces is how to create a sense of belonging in rural areas; how to create opportunities and convince the people that they can have a better life without needing to follow their dreams into the city.

Gabriela explains that “the family is the first to encourage their rural-born children to leave, because they want them to prosper. They don’t transfer their knowledge: parents don’t teach their children how to grow food or to cook, because they want them to go into the city. As a result, the young people don’t have the skills necessary to live in the rural world. The countryside is full of resources, but many people don’t even know what plants they can eat”.

For this reason, Gabriela’s organization teaches the rural population about health and nutrition in addition to agroecology to help develop skills and the potential to generate additional income.

“We promote the sale of crops through local markets, since trade is a decisive factor. We train the rural inhabitants to produce something that will be of benefit to themselves and that they can sell directly to their neighbors or in the next town over”, explains Gabriela, whose organization created a local produce market about half an hour from the city of Querétaro, where people from the city can buy fresh food directly from the farmers.

Gabriela has lovely memories of her childhood on the coffee farm in Chiapas and has reconnected with many of the farmers who worked there and who have recently shifted course. “Today, they are growing vanilla, cardamom, or have built boutique hotels. I think it’s good: it’s a way to generate income that also connects the city and the countryside. We need to build bridges between the ‘haves’ and the ‘have-nots’ and be aware of the importance of healthy foods, which will help us to be less vulnerable to the virus”, concluded Gabriela.

France forward Dembélé out of Euro 2020 with knee injury

Inflation ahead? Even a top economist says it’s complicated