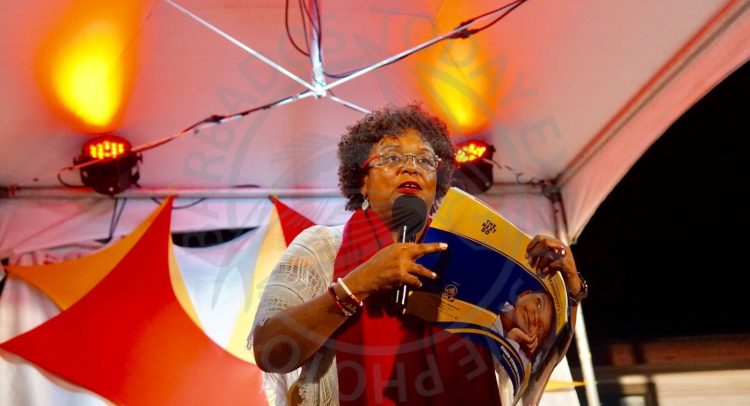 Ahead of Thursday’s manifesto launch by the incumbent Democratic Labour Party (DLP), Barbados Labour Party (BLP) leader Mia Mottley took Barbadians by surprise on Wednesday night, as she pulled out what was said to be a copy of the DLP’s promissory election document.

The unexpected development came during a BLP meeting at Clevedale, St Michael.

Mottley, whose party’s 70-page manifesto released last Thursday has come in for heavy criticism, also proceeded to knock the plans contained in the DLP document, which she said lacked substance and described as “an insult” to the people of Barbados.

“What is this technobabble and gobbledygook? What is it? When done, your children will be in the same position next year, the year after, and for each of the next five years as they are today,” Mottley said, in specifically attacking the DLP’s policy of making students pay tuition fees at the University of the West Indies.

Mottley, whose BLP is promising to abolish those payments and also to increase non contributory pensions, suggested that the DLP document fell short in both respects.

“What does this manifesto tell us about pensioners? Hold tight,” she said in rejecting the DLP’s policies outright, including those outlined for street vendors.

She also dismissed the DLP’s promises to vigorously enforce laws pertaining to illegal dumping, while asking “How you gine do that if you don’t have garbage trucks?” She also expressed amazement that no mention was made in the manifesto of buses, even though the state-run Transport Board is currently faced with an acute shortage of vehicles.

However, in a preview to Thursday’s event in Oistins, DLP campaign manager Robert ‘Bobby’ Morris has promised that the manifesto for the May 24 general election will be a tough but responsible one.

While dismissing the recently released BLP manifesto as unrealistic and unattainable, Morris further promised that the DLP document would be focused on fixing the island’s ailing economy.

“Our manifesto launch is on Thursday night at Oistins and I don’t want you to be wary yet . . . but it will be a responsible manifesto. Don’t look for giveaways that are impossible,” Morris told the crowd gathered at the DLP’s spot meeting in Kingsland, Christ Church on Tuesday night.

“If you have a flat roof we are not promising that we are going to make it gable. I don’t know how many there are and I don’t know what that would cost,” he said in poking fun at the BLP’s 70-page promissory document released last Thursday. And “I am not telling you that it makes sense moving from road tax paid by the individual to a tax of gasoline,” he said in reference to another BLP proposal, adding, “don’t look for an attempt to buy votes”.

Release of the DLP’s manifesto comes against the backdrop of a 0.7 per cent contraction of the island’s economy for the first three months of this year.Delivering the disappointing news at his quarterly media conference earlier this month, Central Bank Governor Cleviston Haynes said the decline was due mainly to a slowdown in construction, a decline in tourism activities and the late start of this year’s sugar harvest.

Haynes said while the island’s foreign reserves grew by $14 million to reach $423 million for the period under review, this was still below the 12 weeks import benchmark with decisive action needed to further drive down the national deficit, which declined by 1.5 per cent to reach 4.2 per cent between January and March this year.

With this in mind, Morris, a former trade unionist and ex-Caribbean Community diplomat, maintained that even though Barbados had been through trying times, Government had made all the tough decisions in an effort to save the country.

He cautioned persons that there was no easy fix to the country’s economic woes.

“I hope that in your hearts and in your eyes you can say, ‘well done DLP’.  It has not been easy, but we are moving onto the Promise Land and after May 24, 2018, this DLP will tell you that if the things in the world remain as they are and don’t get any worse, then we in Barbados will see a new beginning.”