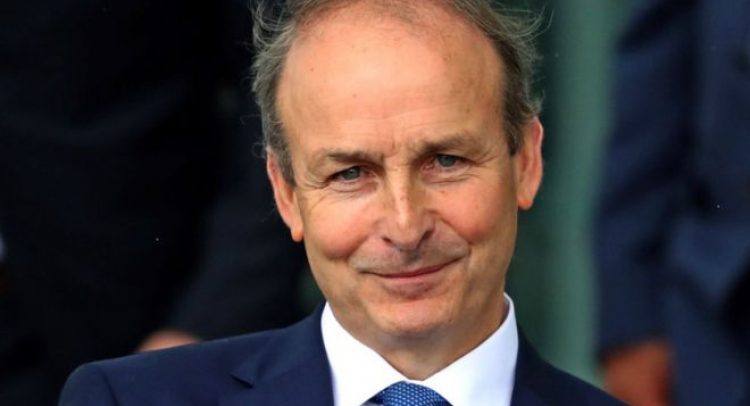 Micheál Martin has been elected as the new taoiseach (Irish prime minister) at a special meeting of the Irish parliament in Dublin.

The 59-year-old Cork native has been the leader of the Fianna Fáil party since 2011.

He will lead a three-party coalition consisting of Fianna Fáil, Fine Gael and the Green Party.

It is the first time in history that former Civil War rivals Fianna Fáil and Fine Gael have governed together.

Mr Martin is expected to lead the country until December 2022 before handing back over to Leo Varadkar, the Fine Gael leader.

In his acceptance speech, Mr Martin said that to be elected to serve as taoiseach was “one of the greatest honours which anyone can receive”.

“I am humbled by the responsibility and I pledge to work night and day with my partners in government to realise the great potential of our nation,” he said in his first tweet as taoiseach.

Mr Martin has been a member of the Dáil (lower house of Irish parliament) for just over 30 years.

He served as cabinet minister in several Fianna Fáil governments from 1997 to 2011 and his roles included minister for foreign affairs; health; education as well as enterprise, trade and employment.

As health minister in 2004, he became the first national government minister in any part of the world to introduce a workplace smoking ban, which also banned the public from lighting up in pubs.

Mr Martin was elected taoiseach by members of the Dáil in a special sitting on Saturday.

The vote took place at the Convention Centre in Dublin, rather than its traditional home at Leinster House, due to Covid-19 social distancing rules.

A majority of 93 members of the Dáil voted in favour of him taking the role, while 63 members voted against him.

Mr Martin was later presented with his seal of office by Irish President Michael D Higgins at the president’s official residence, Áras an Uachtaráin, on Saturday afternoon.

Mr Martin appointed a new cabinet on Saturday evening, dividing the roles between all three parties.

Fine Gael leader Leo Varadkar is now the tánaiste (deputy PM) as well as minister for enterprise, trade and employment.

The rest of the posts were distributed as follows:

Mr Varadkar has been caretaker taoiseach since the general election in February.

No party came close to winning a majority in the poll which would enable them to govern alone, but coalition talks were then halted by the coronavirus pandemic.

Fianna Fáil won the most seats, but the two larger parties needed the support of the Greens to have a working majority in the Irish parliament (the Dáil).

The party leaders and their negotiating teams reached agreement on a coalition deal earlier this month.

“Ireland is our closest neighbour, good friend and ally on issues such as climate change, the global fight against Covid-19 and our shared values on human rights and democracy.”

Not everyone supported the new taoiseach during Saturday’s vote in the Convention Centre.

At February’s election, Sinn Féin took 24.5% of first-preference votes, compared to 22% for Fianna Fáil and 21% for Fine Gael.

“Faced with the prospect of losing their grip on power, Fianna Fáil and Fine Gael have circled the wagons,” she said, claiming the new coalition was a “marriage of convenience”.

But Fianna Fáil’s Norma Foley nominated her party leader, saying Micheál Martin had a proud record for delivering for the people of Ireland and “the talent and tenacity we need to lead the country with distinction”.

‘Civil War politics’
Fine Gael leader and outgoing taoiseach Leo Varadkar said his party would not make a nomination but instead would support the nomination of Micheál Martin.

Referring to their two parties entering a coalition for the first time, Mr Varadkar said Saturday’s vote was an “historic occasion”.

He said the new coalition’s programme for government “provides a good plan; an immediate stimulus” and added the three parties “will get down to work on Monday morning, first thing”.

Labour leader Alan Kelly said his party would not support the nomination of either Mr Martin or Ms McDonald.

He said Sinn Fein was “simply going through the motions of appearing to be interested in government” and had not attempted to put forward a programme for government that could attract majority support.

People Before Profit Richard Boyd Barrett did not support Mr Martin’s nomination and said the coalition’s programme for government was a “re-hash and reheating of the same failed policies”.

Main photo: Micheál Martin will lead his Fianna Fáil party into a historic coalition with Fine Gael and the Greens (PA Media)