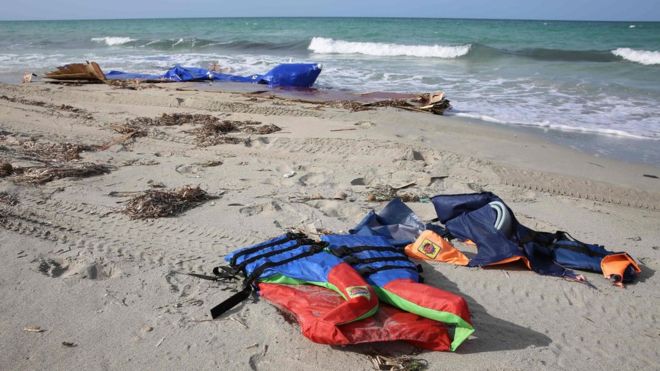 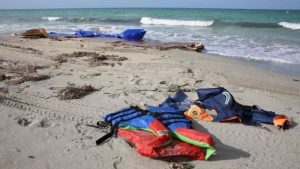 Ninety migrants are feared drowned after a boat capsized off the Libyan coast, says the UN’s migration agency.

Three survivors said most of those who drowned were Pakistani nationals. Libyans were also aboard.

Libya has for years been a major transit route for migrants trying to reach southern Europe by sea.

EU countries have wrangled over both reducing migrant numbers and deciding which countries are responsible for processing migrants on arrival.

The EU struck a deal with the Libyan coastguard last year to help intercept migrants and return them to Libya.

But aid agencies and the UN accused European governments of taking an “inhuman” approach.

What happened in the latest disaster?

From a boat carrying more than 90, only three survivors are reported – two of whom managed to swim to shore, while the third was picked up by a fishing boat.

“Ten bodies are reported to have washed up on Libyan shores,” the International Organization for Migration (IOM) said in a statement.

Unusually, there were also Libyans among the dead and survivors of the shipwreck, reports the BBC’s North Africa correspondent Rana Jawad.

The Facebook page of the security directorate in the coastal city of Zuwara, where the bodies washed up, said a Libyan woman had drowned, but that of the three survivors two were Libyan nationals.

What’s unusual about the nationalities of those on board?

The majority of incidents of this kind involve migrants from sub-Saharan Africa.

In this case, most of those on board were Pakistani. The IOM says this is becoming more common.

While Pakistanis were 13th on a list of the number of migrants trying to reach Europe last year by nationality, so far this year they are third, the IOM says.

Perhaps aware of the danger, Libyans rarely attempt the boat journey from their country to southern Europe.

Some cases of illegal Libyan migration were documented last year, but they usually involved sturdier boats that were carrying few people.

Analysis: A trend that will worry Europe

Although it is not the first time Libyans have attempted this crossing, this is a rising development that European countries will likely be watching with concern.

The EU’s entire strategy to curb illegal migration from Libya onto its southern shores is built on refugees and asylum seekers from countries like Syria, Eritrea and Sudan, as well as the broader swathe of sub-Saharan African countries which generate the most economic migrants.

It’s largely been about border controls in the south, as well as getting the Libyan coastguard to intercept more migrants so they can be “voluntarily repatriated” to their countries of origin.

As the uncertainties over the country’s future as a functioning state continue to mount, Libyans are getting increasingly desperate. I’ve been told by a UN special rapporteur for human rights that some of the country’s internally displaced people have recently been expressing a desire to make the illegal journey to Italy.

Haven’t the numbers of migrants reaching Europe been declining?

So the numbers are comparable but this year’s figures still represent a considerable bounce-back following a dramatic fall over the second half of 2017, the IOM told the BBC.

Some of last year’s decline can be attributed to the EU’s controversial deal with the Libyan coastguard, but the IOM also believes there were difficulties within the people-trafficking industry.

“We think that there was a lot of pent-up demand in terms of migrants being held in warehouses by the smugglers,” said the IOM’s Joel Millman.

If the channels have been opened again, that might explain the sudden surge which has seen numbers increase again.

What about the European migrant management programmes?

The latest deaths come just after the EU border agency Frontex announced the launch of Operation Themis on Thursday.

Unlike its previous mission, known as Triton, migrants rescued at sea will now be taken to the country that is co-ordinating the rescue, rather than just Italy.

Italy has increasingly vocally complained about a lack of EU solidarity in managing migration. It is also conscious of popular unease ahead of a 4 March national election.

However, as Italy undertakes the vast majority of sea rescues in waters between North Africa and its coast, Themis is unlikely to have more than a token effect on the numbers arriving in the country.