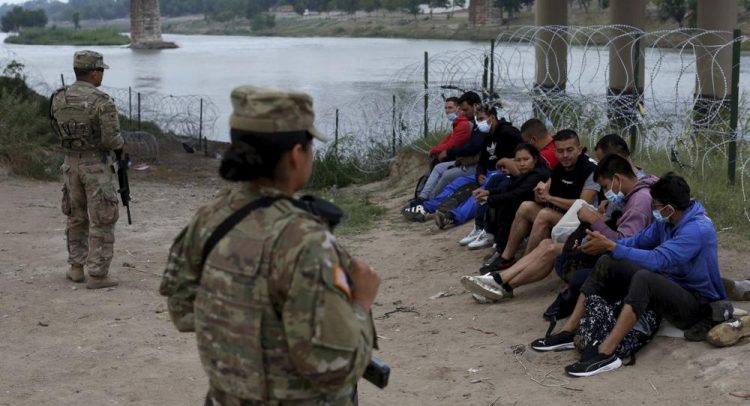 EAGLE PASS, Texas (AP) — As U.S. officials anxiously waited, many of the migrants crossing the border from Mexico on Friday were oblivious to a pending momentous court ruling on whether to maintain pandemic-related powers that deny a chance to seek asylum on grounds of preventing the spread of COVID-19.

The Justice Department, hoping to avoid last-minute scrambling over the weekend, asked U.S. District Judge Robert Summerhays to decide by Friday whether to keep Title 42 in place while litigation proceeds. The judge in Lafayette, Louisiana, has said he would decide by Monday, when the public health powers are scheduled to expire.

Migrants crossing in Eagle Pass, Texas, knew little or nothing about the rule under which migrants have been expelled more than 1.9 million times since March 2020. They were largely from Cuba, Colombia, Nicaragua and Venezuela — nationalities that have mostly been spared from the asylum ban because high costs, strained diplomatic relations or other considerations make it difficult for the U.S. to fly them home.

Ana Pinales of the Dominican Republic, who reached Eagle Pass after three years of living illegally in Chile, where she was unable to find steady work, waded across the river before dawn and walked down a dirt road with about 35 Nicaraguans and 25 Cubans, searching for U.S. Border Patrol agents to claim asylum. She walked longer than the rest and met about 15 other migrants waiting under one of Eagle Pass’ two bridges to the Mexican border city of Piedras Negras. After several hours, an agent arrived for them, relieving armed Texas National Guard members who had watched over the group as golfers played on an adjoining riverfront course.

“Everyone in the world knows about this route,” Pinales, 28, said with a smile, relieved that she was nearly at the end of a two-month journey that took her through Panama’s notorious Darien Gap and Mexico, where she was robbed of $3,000 while biding her time in a park in the southern city of Tapachula. She said she also frequently paid bribes to get past Mexican military checkpoints.

Title 42 has largely affected people from Mexico, Guatemala, Honduras and El Salvador, many of whom have been waiting in Mexican border towns after being denied the right to seek asylum by the U.S. government. Mexico has agreed to accept migrants from those three Central American countries turned back by the U.S. and last month also started taking in limited numbers of Cubans and Nicaraguans who have been turned away by U.S. authorities.

Nolberto Avila, a small coffee grower who fled threats of violence in Colombia and left his mother and a sibling there to manage the harvests, had never heard of Title 42 in the social media channels that migrants consult to determine whom they can trust and whom and what to avoid. Online chatter directed him to Eagle Pass after he flew to Cancun and took buses to the U.S border.

“It feels good to be here,” said Avila, 30, who spent $3,000 on airfare and other travel expenses, such as bribes to Mexican soldiers. His ultimate destination is Los Angeles.

A group of about 150 mostly Cuban migrants assembled on Friday a short distance south of the bridge, having swum and walked across the river in smaller groups over several hours since a few hours before dawn. Border Patrol agents lined them up single file and directed them into vans to go to a processing area. About two-thirds were men, nearly all the rest were women and some were young children.

Migrants who had crossed the Rio Grande river into the U.S. are under custody of National Guard members as they await the arrival of U.S. Border Patrol agents in Eagle Pass, Texas, Friday, May 20, 2022. The Eagle Pass area has become increasingly a popular crossing corridor for migrants, especially those from outside Mexico and Central America, under Title 42 authority, which expels migrants without a chance to seek asylum on grounds of preventing the spread of COVID-19. A judge was expected to rule on a bid by Louisiana and 23 other states to keep Title 42 in effect before the Biden administration was to end it Monday. (AP Photo/Dario Lopez-Mills)

EXPLAINER: What is monkeypox and where is it spreading?