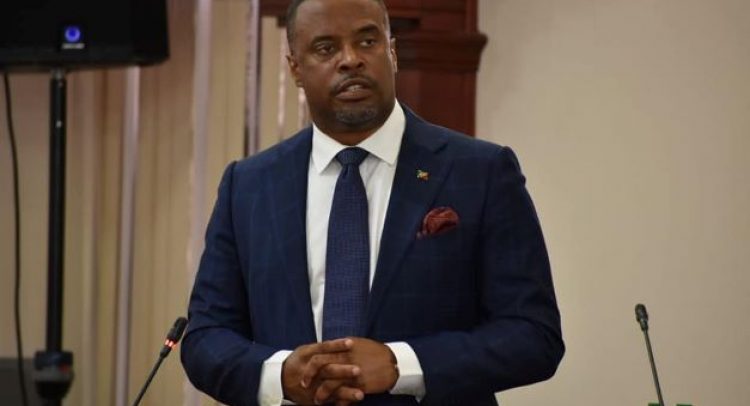 Basseterre, St. Kitts, June 29, 2021 (SKNIS): Health and emergency officials leading St. Kitts and Nevis’ response to the COVID-19 pandemic were saluted by the Minister of Foreign Affairs and Civil Aviation, Honourable Mark Brantley, for their dedicated and selfless public service.

While making a presentation at Monday’s (June 28, 2021), Emergency Sitting of the National Assembly, Honourable Brantley, who is also the Premier of Nevis and Member of Parliament for Nevis #9, highly commended the Federal Minister of Health, Honourable Akilah Byron Nisbett and Junior Minister of Health in the Nevis Island Administration, Honourable Hazel Brandy-Williams. He highlighted the contributions of Abdias Samuel, Chair of the National COVID-19 Task Force; Dr. Hazel Laws, Chief Medical Officer, and Dr. Cameron Wilkinson, Medical Chief of Staff of the J. N. France General Hospital, along with Dr. Judy Nisbett, the COVID-19 Task Force Head in Nevis and Mr. Brian Dyer, Director of the Nevis Disaster Management Department, the members of the Task Force and others across the twin-island Federation.

He expressed that these officials “have really been at work 24/7” since March 2020, when the Novel Coronavirus was first imported into the country. The officials developed robust protective protocols, mobilized public and private sector resources, and instituted strict testing, contact tracing, travel quarantine, and isolation guidelines that kept the COVID-19 confirmed cases to 45 up until May 19, 2021.

A cluster of cases subsequently developed, followed by community spread over the past five weeks. St. Kitts and Nevis has since recorded 394 confirmed cases and three deaths.

Minister Brantley said that the officials have gone “above and beyond” in leading the local response to the pandemic.

“If we ever required exemplars of national service, I believe that these individuals have exemplified national service, particularly in a time of crisis in our country,” he stated. “I believe our Parliament and every one of us out there ought to celebrate them for the sacrifice that they would have made to keep us safe and to bring us to this point,”

The awards are among the highest in the land. They were established under the National Honours Act.

Fears aside, no ‘mass exodus’ from collapsed building’s twin